SRH are chasing 168 to win and have been dented after a good start.

David Warner and Shikhar Dhawan have been dismissed by JP Duminy in their Indian Premier League (IPL) 2015 match between Sunrisers Hyderabad (SRH) and the Delhi Daredevils (DD) at the Dr YS Rajashekhara Reddy, ACA-VDCA Cricket Stadium, Visakhapatnam. SRH had started off by hitting 50 inside the six overs and then Duminy brought himself on and he dismissed them.  Live Scorecard: Sunrisers Hyderabad (SRH) vs Delhi Daredevils (DD) IPL 2015 Match 13

SRH are chasing 168 to win and had started off nicely. But then Duminy got those wickets and has dented them. Dhawan was dismissed as he tried to cut and missed. Warner then got an edge which flew to Duminy and he took the catch after his follow through. That over cost only three runs and two wickets. This has certainly got them back in the game here. Live Updates: Sunrisers Hyderabad (SRH) vs Delhi Daredevils (DD) IPL 2015 Match 13

DD had won the toss and had chosen to bat first in this game. Shreyas Iyer had scored a fifty and then JP DUminy also followed suit. However, SRH then did well to restrict them to 167. With these two wickets falling, this could be a good game now. 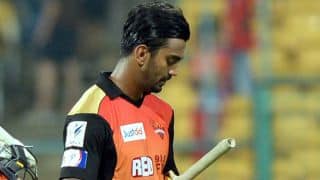