Warner faced 55 balls and smashed nine boundaries and four sixes, as he led Sunrisers’ charge after he and Dhawan got off to a cautious start early on. Warner opened up with a four past the fine leg off Morne Morkel on the fourth ball of the second over, and then there was no stopping the left-hander. CRICKET SCORECARD AND COMMENTARY: Sunrisers Hyderabad (SRH) vs Kolkata Knight Riders (KKR) in IPL 2015 match 19

Dhawan, who too is an explosive batsman by nature, provided Warner the support he needed from the other end. The Indian cricketer continued to rotate the strike and kept picking up boundaries off loose balls.

The 130–run stand between Warner and Dhawan bettered their previous record, which was of 116 runs for the opening wicket during IPL 2014. This was also their third century opening partnership in IPL.

Warner was severe on the Kolkata Knight Riders (KKR) bowlers as he made them look ordinary, and even the likes of Morkel and Sunil Narine, who in fact generated good amount of turn at the ACA VDCA Stadium, failed to make a mark.

The left-handed Warner did not go looking for quick runs every ball, but he did well to connect whenever he wanted to. On one occasion, Morkel was smashed for a four, which almost was a six as the ball was flat and hit hard, ramming right next on the ground near the boundary ropes.

Warner brought up his half-century from 36 balls with the help of six boundaries and two sixes. The first six was hit of Yusuf Pathan on a poor, short delivery, while the second was hit on another short ball, this time off Umesh Yadav, over the third man to also bring up his half-century.

The Sunrisers Hyderabad batsmen kept going for their strokes at will and none of the Kolkata Knight Riders could pose them any threat. It was in the 15th over when the defending champions could make a breakthrough, when Warner mistimed one off Morkel and KKR wicketkeeper Robin Uthappa grabbed the ball that had gone high in the air.

Warner was unfortunate to have missed out on century as he fell for 91 off 55 balls, studded with nine boundaries and four sixes. Sunrisers then promoted Ravi Bopara in their batting line-up trying to get their scoring rate higher, but the move failed as Bopara became the second victim of Morkel, being dismissed for two.

It was in the 18th over that Dhawan brought up his half-century, with a single off Yadav, after facing 43 balls and hitting three boundaries and a six. But in the next over, the SRH opener was dismissed by Andre Russell.  Naman Ojha, towards the end, did well to strike two sixes and a boundary to score eight-ball 18. 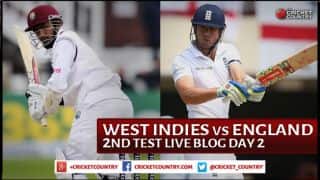