The openers, after putting on a century stand, are now out.

After a century opening stand between David Warner and Chris Rogers, Steven Smith combined with Warner, and later Michael Clarke, to keep Australia flowing to get to a meaty first-innings total. The first wicket fell in the first hour after lunch, when Rogers chased a ball outside off stump and provided a catch to Alastair Cook in the slips, and the second fell about an hour later, when Warner edged off-spinner Moeen Ali to slip for 85. Australia finished the session, dominated by boundaries from Warner, at a healthy 184 for 2. LIVE CRICKET SCORECARD: England vs Australia, 5th Test, The Oval, Day 1

Rogers, who will retire at the end of this match, passed 2000 personal Test runs in the first ball after lunch. He had been playing Mark Wood and Stuart Broad more comfortably than in the morning, with three boundaries scored off them, but then fell in an anti-climax. Warner and Smith then played slowly, before settling in to effect a few boundaries off Steven Finn, Ben Stokes and Ali, who eventually claimed Warner’s wicket before the pugnacious left-hander could get to a century. LIVE CRICKET UPDATES: England vs Australia, 5th Test, The Oval, Day 1

Clarke arrived to play the first innings of his last Test, and has so far stroked a four in his short stay. His partnership with Smith is now worth 23 runs. 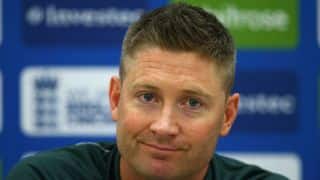 Michael Clarke given Guard of Honour by England cricketers during Day 1, 5th Ashes 2015 Test at The Oval