David Warner (179) and Travis Head (128) put up a record 284-run stand for the opening wicket in the final ODI between Australia and Pakistan in the fifth ODI.

David Warner (179) and Travis Head (128) put up a record 284-run stand for the opening wicket as Australia pounded Pakistan once again in the five-match ODI series, posting 370 to win in the fifth and final match at the Adelaide Oval on Thursday. Warner posted his highest ODI total of 179 off a mere 128 balls and Head stroked his way to his maiden century in 50-overs cricket. Warner and Head added 284 for the first wicket, which is now the best opening stand for Australia, and the second highest overall against Pakistan. The visitors remained poor in the field as Warner was dropped on the very first ball of the innings, and the Australian vice-captain made them pay dearly for the mistake.

On the Australia Day , Warner lit up the Adelaide Oval with a belligerent hundred that included 19 boundaries and 5 sixes. Warner registered his highest individual total, but failed once again in the 170s as a maiden double hundred in ODI cricket remained elusive. However, Warner did register overall the third highest individual score by an Australian in ODI cricket, behind Matthew Hayden (181) and Shane Watson (185). Warner s 179 is also the second highest individual total against Pakistan, following Virat Kohli s 183. FULL CRICKET SCORECARD: Australia vs Pakistan, 5th ODI at Adelaide

Head went on unperturbed when Warner was finally dismissed in the 42nd over. The left-hander remained likely to carry his bat, but Head s innings came to an end in the 47th over when he skied one while attempting a big hit. Head perished for 128 off 137 balls, studded with 9 boundaries and 3 sixes.

It was a horror day once again on the field for Pakistan, who started the final game of their Australia tour 2016-17 with a dropped catch. The new ball from Mohammad Aamer was a tad outside off and swung away from Warner, who approached the ball to hit it on the off side.

However, there was an outside edge that went wide of the second slip, and Pakistan captain Azhar Ali dove desperately to his left to take the chance. He did get in time, but the ball dropped down after hitting his hand. Full Cricket Updates, Pakistan vs Australia, 5th ODI at Adelaide

That was the only chance which Pakistan had for the next 41 odd overs. Warner and Head went berserk, and aided by several misfields, overthrows and even dropped catches. They went on to register the highest stand for any Australian opening pair in ODI cricket.

Warner and Head s 284-run stand is now not just the highest opening stand; it is also Australia s highest partnership for any wicket against Pakistan. Warner s total of 179 is now the highest score by any batsman at the Adelaide Oval in ODI cricket. He surpassed Brian Lara s 156 also against Pakistan scored in 2005.

Warner also joined Sachin Tendulkar in posting most totals in excess of 150. In his 463 ODIs, the Little Master scored 150 or more 5 times. Warner, however, has equalled Tendulkar in only 93 matches.

Australia looked well-set for a total in excess of 400 at one stage. However, Warner’s dismissal in the 42nd over opened the floodgates and the hosts’ batmen fell in a flurry trying to achieve the target. Steven Smith (4), Glenn Maxwell (13), Matthew Wade (8), Peter Handscomb (1) and Mitchell Starc (5) were dismissed in quick succession as Australia hobbled to 369 for 7 in their allotted 50 overs.

For what it is worth, Hasan Ali who took a 5-wicket haul in the previous game at Sydney was pummelled for 100 runs off just 9 overs. Wahab Riaz made a disappointing return with the ball, but he did take a splendid catch to get rid of Smith. 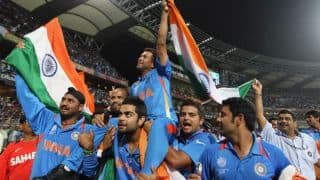 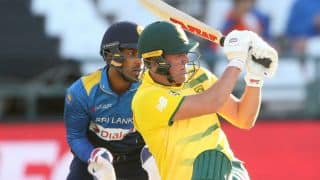