Talking about the captaincy approaches of David Warner and Kane Williamson, Siddharth Kaul said both of them give freedom to their bowlers.

New Delhi: Sunrisers Hyderabad fast bowler Siddharth Kaul is confident about making an impression with a strong mindset in the second half of the Indian Premier League. Siddharth had a great domestic season with Punjab ahead of the IPL 2021. In the 2021 Syed Mushtaq Ali Trophy, he claimed 14 wickets in just 6 matches. To add to that he also scalped the same amount of wickets in the last season of Vijay Hazare Trophy in 5 matches.

The BCCI has already announced the remainder of the IPL 2021 matches to be held in the UAE in the September October window.

In an exclusive conversation with CricketCountry, Siddharth spoke about whether a player’s mindset gets affected when a tournament gets abruptly suspended and then resume after a few months.

“I don’t think there is any negative change in the mindset of any player as it’s a good thing that IPL will restart. It’s a boost up for everyone, I will return to the tournament more mentally strong and preparation will also be better rather than thinking that it’s a setback. But yes, if it didn’t then it would have been a setback,” Siddharth told CricketCountry.

In the first half of IPL 2021, Kaul claimed three wickets in as many matches with an economy rate under 8. However, SRH had a tough time as they were at the bottom of the table when the tournament got suspended.

Siddharth feels that the team will follow the same pattern as they didn’t lose any match with a big margin and took the game closer on several occasions. He is confident that the Orange Army will get the momentum back after the break.

“Basically, we have to follow the same pattern, as despite being at the bottom of the table we played decent cricket and we lost most of the matches by close margins or in last overs. We didn’t lose by 50 runs or let the opposition chase the total in 13-14 overs. It’s about the momentum, I’m confident that we will get the momentum back after the break,” he said

Comparing David Warner and Kane Williamson style of captaincy, Kaul said both of them give freedom to their bowlers. Warner wanted the bowler to express themselves, while Williamson added valuable inputs to the bowler’s desire that would yield the best result.

“There are not any big difference in their approaches. The only difference is that David Warner gives freedom to the bowlers by providing the field of their choice and wants us to execute our plans. While Kane Williamson always has a discussion with the bowlers as he sits down with us and shares his requirements with us and also ask about the player’s opinion. He also gave us the freedom to set the field. The thing is one tells you to express yourself while simultaneously the other gathers the things you want to express and gives his inputs to coordinate for the best result.”

“We have the reputation of defending targets and take the match close and it’s the relationship between the captain and the bowler that has helped SRH, be it Williamson or Warner as the leader,” he said.

With all the injuries that plagued SRH in the first half of the season, Kaul reckoned that although it can be a huge setback, the team had the depth in the pace attack to come back strong.

“When a senior player like Bhuvneshwar Kumar gets injured, it’s surely a huge setback for any team, but we have a good pack of pace attack with a lot of depth in it. Every player knows his rule. Last year Bhuvneshwar got injured early and despite that, we reached the playoffs. This season also, we gave our best as we have enough backup options. If Natrajan misses out then Khaleel gets a chance, if Bhuvi gets injured then I and Sandeep are there. So, SRH have a good backup and that’s the reason why we didn’t struggle much in the bowling,” the 31-year-old said. 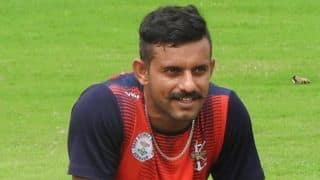