Australia s stand-in skipper David Warner expressed his disappointed after losing his first game for the country with him at helm.

Australia s stand-in skipper David Warner expressed his disappointed after losing his first game for the country with him at helm. Australia had suffered a 1-4 defeat against India in the ODIs and their fortunes continued to slip when they lost to India in the rain-effected T20I by 9 wickets (DLS) at Ranchi.

At the end of the day, it’s a poor result for us. We have to be better next game. We didn t deserve to have that chance after almost being bowled out for 120, said Warner at the post-match presentation ceremony. Warner had words of encouragement for his bowlers. But to get as close as we did, the bowlers did an okay job. I don t have an answer for our struggles in T20Is.

Australia have struggled in T20Is, and this is their seventh defeat on the trot against India. They are the seventh-ranked side in this format according to ICC Rankings.

Jason Behrendorff made his debut and was flicked for a boundary by Rohit Sharma off his first ball in Australian colours. However, the left-arm pacer came back well to give away only 5 from his over. He played no further role in the rain-marred tie.

He s (Behrendorff) from Perth and he s got nice bounce and pace. I’m looking forward to playing more games with him in Australian colours, said Warner.

The teams will play their second T20I on Tuesday at the new stadium in Guwahati. 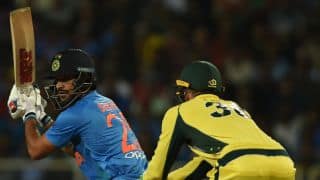