This was David Warner's fourth 50+ knock in his last 5 innings in South Africa.

Australian opening batsman David Warner let his bat do the talking after a week of controversy when he made an unbeaten half-century on the first morning of the second Test against South Africa on Friday. Australia were 98 for one at lunch after winning the toss and batting in overcast conditions at St George’s Park.

Warner, with 50 not out, and Cameron Bancroft (38) battled through a difficult first hour to give Australia a solid start before Bancroft was caught behind off Vernon Philander from what proved to be the last ball before the interval.

They could score only 23 runs in 14 overs in the first hour but picked up the scoring, adding 36 runs in the first three overs after the mid-morning drinks break.

Warner, who was fined 75 percent of his match fee after an altercation with South Africa’s Quinton de Kock during the first Test in Durban won by Australia, was watchful at the start as the ball seamed around off a well-grassed but slow pitch.

But Warner batted with typical enterprise as batting conditions eased, reaching his half-century off 69 balls with eight fours.

Despite suggestions on social media that Warner could be the target of abuse or derogatory signs from spectators, there was no obvious hostility from the small crowd in Port Elizabeth.

Philander conceded only five runs in a seven-over opening spell before coming back in the last over before lunch to dismiss Bancroft, who edged a ball which seamed away from him. 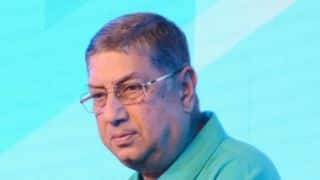