Davison to retire after Australia game

Davison to retire after Australia game

Canada's John Davison, who once held the record for the fastest World Cup century, will retire from international cricket after his side's final match against Australia. 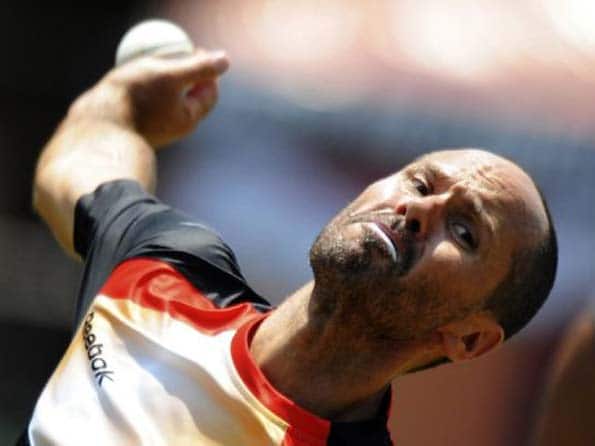 Canada’s John Davison, who once held the record for the fastest World Cup century, will retire from international cricket after his side’s final match against Australia.

Davison, born in Canada but brought up in Australia, smashed the then fastest hundred in the tournament’s history in 2003, off just 67 balls, including six sixes and seven fours, against the West Indies at Centurion. “I suppose it’s pretty fitting it’s against Australia,” 40-year-old Davison said of his final international match on Wednesday.

“I’ve lived all my life there, never quite good enough to get a game for them but it will be a great experience to play against them. There are some guys in their team I have had a fair bit to do with, both playing against and coaching so it would be nice to have a good showing,” added Davison, now a coach at Australia’s Centre of Excellence in Brisbane.

Australia’s Matthew Hayden broke Davison’s record at the 2007 World Cup and it was broken again at the ongoing tournament by Ireland’s Kevin O’Brien, who reached three figures off just 50 balls against England.

What made Davison’s record-breaking innings in 2003 all the more remarkable was that he made his name with state sides Victoria and South Australia as an off-spinner. “I was hitting it a lot better than I am now,” joked Davison as he recalled his whirlwind century. “It was a fantastic wicket, the ball wasn’t swinging and I was able to hit through the line of the ball.

“It was just one of those days where everything I tried came off, so hopefully there’s one more innings like that left in me.”

Wednesday’s match is also set to see Davison being in the unusual position of playing against two players he’s coached in Australia spinners Jason Krejza and Steven Smith. “I’m really looking forward to that experience,” Davison said. “If I can manage to stay out in the middle for a while, and face some balls from them, I can’t imagine a better place for a coach to give feedback from.”

Australia captain Ricky Ponting said he had many memories of Davison. “We were at the academy together in an intake in 1991,” said Ponting.

“We had a few overseas tours as part of that academy and we played with and against each other for quite a period of time through different state competitions back home.

Ponting added: “He’s got some great memories now out of World Cup cricket, playing with Canada, that he probably never thought he would have.

“At one stage to have the fastest World Cup hundred ever is a great achievement for him. He’ll be able to look back at the end of his career and look at some pretty good memories.”

Davison has had a poor World Cup, scoring just 19 runs in four innings.

Wednesday’s game will be his 32nd ODI. He has scored 785 runs with five fifties and a century.

Canada have a point to prove against Australia: Bagai