Sri Lanka, who took an unassailable 2-0 lead in Galle, have a great chance to register their first whitewash against Australia since gaining Test status in 1981.

Sri Lanka were kept on toes with Australia bowlers restricting the hosts to 55 for 5 at Lunch on Day One of third Test in Colombo. Mitchell Starc and Nathan Lyon shared three and two wickets each, to keep Australia ahead in the first session. Bagging three wickets, Starc secures 20 wickets in this series. In contrast, skipper Angelo Mathews along with Kusal Perera and Kusal Mendis, failed to show their batting prowess to save them from opening batting woes. However, Dinesh Chandimal and Dhananjaya de Silva showed their aggressive batting prowess and kept Sri Lanka hopes alive playing at 7 and 23 before heading for Lunch. LIVE CRICKET SCORECARD: Sri Lanka vs Australia, 3rd Test at Colombo

Sri Lanka’s opening batsmen once again struggled to get runs to the bat as they were dismissed for single digits once again. This series has not been favorable for the opening batsmen and impetus lied to the middle-order. Starc provided the early start by drawing the first blood with an edge from Kaushal Silva and skipper Steven Smith making no errors in grabbing the first wicket. Expectations were high when Perera entered at No. 3. He started off with some swash buckling boundaries, but Lyon bowled him out for 16 leaving Sri Lanka in dismay. That was the fourth time Lyon picked Perera in the series.

Starc and Lyon were seen juggling with wickets as Starc struck once again this time picking Dimunth Karunaratne for 7. Starc has picked Karunaratne for the fifth time in this series and Starc was seen animated showing Karunaratne the figures as he walked out. Mendis, who scored a century to guide Sri Lanka to victory in the second Test, was gone for 1 by Starc and soon skipper Angelo Mathews also found his way back with Lyon leaving no scope for Sri Lanka to survive ahead of Lunch.

Earlier, Sri Lankan skipper Mathews won the toss and elected to bat against Australia in the third and final Test in Colombo on Saturday. Medium-pacer Suranga Lakmal, who has recovered from an hamstring injury, joined the Sri Lanka in place of left-arm seamer Vishwa Fernando. Australia, whose batting has struggled against Sri Lankan spinners on turning wickets, have included Shaun Marsh and Moises Henriques in place of Joe Burns and Usman Khawaja. Sri Lanka, who took an unassailable 2-0 lead in Galle, have a great chance to register their first whitewash against a major team since gaining Test status in 1981. 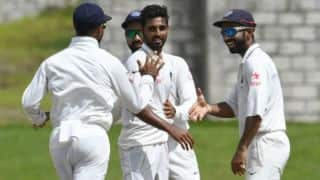