Wahab Riaz's 2-for devastated England's top order after Alastair Cook had won the toss and elected to bat on a green top on Day 1 of the fourth and final Test at The Oval.

Pakistan will be a happy camp, as they walk out with content towards the dressing room after the end of first session of the fourth and final Test at The Oval. England skipper Alastair Cook elected to bat first after winning the toss, a decision that was well backed by the England batsmen with the way they opened their innings. Cook and Alex Hales looked sturdy as they faced swinging balls from Mohammad Aamer and Sohail Khan. Cook went on to go after Sohail as he hit some of the glorious shots of the first session, wherein the captain just pushed the ball in between the gaps with sheer timing. Going at lunch, England were 92 for 4, with Gary Ballance not-out on 3 & Jonny Bairstow not-out on 13 . Full Cricket Scorecard, England  vs  Pakistan , 4th Test match

Hales looked clumsy and his stay did not long much as he caught by Yasir Shah at sqaure leg on Aamer’s bowling.  Hales’s wicket turned out controversial as Hales looked convinced that the ball had bounced before Yasir collected it. On-field umpire initially gave Hales out but looking at the batsman’s reluctance to leave the crease they decided to go to TV umpire. TV umpire could not give any conclusive decision as the available video did not produce substantial result. With no decision given from TV umpire,  Hales was adjudged out based on on-field umpires call. ALSO READ:Misbah-ul-Haq’s statement over future puts spotlight back on Pakistan’s flaws

Joe Root who came in at No. 3 started off well with in-form skipper Cook, batting with a 70 plus strike rate. Pakistan looked clueless as a team as nothing went their way, along with some poor fielding effort and a dropped catch of Cook by debutant Iftikhar Ahmed at first slip. But Sohail Khan struck the very next over as he got rid of dangerous looking Alastair Cook as the England skipper tried to pull back of length ball but eventually Cook got a inside edge dragging ball onto the stumps. ALSO READ: Pakistan vs England: Things to know about Iftikhar Ahmed

Soon to depart was Joe Root who tried poking an outgoing ball by Riaz into the gloves of wicket- keeper Sarfraz. With England already having lost 2 set batsmen, Pakistan reacted quick to the situation and James Vince trying to defend a extra bounced ball of Wahab Riaz edged the ball into keeper Sarfraz’s glove.

This session has had everything so far, with Pakistan having the upper hand. England batsman will have to stick to their basics in the second session or they can be bundled up quite soon by Pakistani bowlers. 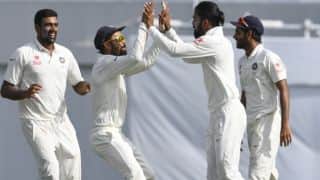