New Zealand  lose same amount of wickets as they take into Tea 235 for 5 as opener Tom Latham retired on 55 to give other batsmen a chance to get accustomed to the situation. After Latham retired, Henry Nicholls came in to bat. Ross Taylor was taking on the bowlers hitting them for boundaries. Taylor hit two maximums before he got for 41 as he was caught in front of wicket by Vijay Gohil. Nicholls followed him soon as he got out in similar fashion, departing after scoring 29. Siddhesh Lad took his wicket, Mitchell Santner came in to bat after that. As wicketkeeper-batsman BJ Watling and Santner tried to form a partnership, the run-rate fell down significantly. They scored less than 4 runs per over.

Earlier Balwinder Sandhu bowled a tight spell after lunch giving just four runs in his four-over spell. Sandhu bowled brilliantly well today in both sessions sending back opener Martin Guptill and then getting a breakthrough when skipper Kane Williamson was looking dangerous. Left-arm spinner Vishal Dabholkar was hammered for runs in his first spell but came back well after the lunch bowling a tight line and length.

The kiwi batsmen have taken a rather attacking batting approach on Day One of the warm-up game. Five sixes have already featured in today’s game’s play. Guptill hit a single six whereas Williamson and Taylor sent to balls each over the fence for a maximum. 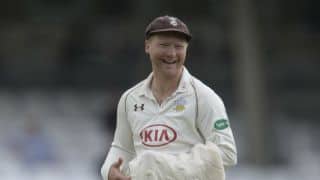