Ravichandran Ashwin and Wriddhiman Saha's partnership of 190 runs for the sixth wicket has helped India cross the 300-run mark against West Indies in third Test at St Lucia.

India on Day Two looked more in control and command as compared to Day One where they kept on losing wickets in a flurry. Ravichandran Ashwin and Wriddhiman Saha, who showed some rear-guard action last evening continued their resistance with West Indies bowling toiling hard. Ashwin and Saha brought India back into the game, notching a 150-run stand for the sixth wicket to get India to safety at 316 for 5 at lunch. Saha scored his third Test half-century during his knock of 93*. Saha looked in good nick in between his block-o-thon, hitting a few boundaries here and there. Ashwin on the hand, looked good for his fourth Test ton, remained unbeaten on 99.   Live Cricket Scorecard: India vs West Indies, 3rd Test match

Ashwin and Saha also achieved the highest partnership for India in this series so far, eclipsing Virat Kohli & Ashwin’s 168 run stand. Both also notched up the highest ever 6th wicket stand for India against West Indies, previous best was 170 by Sunil Gavaskar and Ravi Shastri. Saha in the second half of the session looked aggressive and swiftly neared his maiden Test ton. Ashwin, if and when he achieves his fourth Test ton, will enter a list of luminaries who have taken two 5-fors and scored 2-Test tons in the same series. The list includes Richie Benuad, Ian Botham and Tony Greig.

West Indies bowlers toiled long and hard all morning. This session yielded 82 runs in this 25 overs that were bowled. 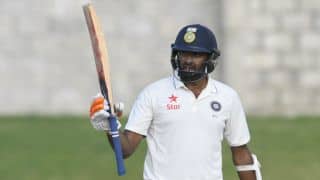