Some gritty batting from Asad Shafiq and Younus Khan in the second session have put the visitors in the driving seat of the last Test at The Oval, Kennington. England started the second session by quickly claiming the wicket of Azhar Ali who got dismissed on 49 by Moeen Ali. That was the only thing which went England’s way in the second session as they looked completely clueless against the good batting of Asad Shafiq and Younus Khan. Shafiq who was watchful in the first session accelerated his scoring rate after he reached his fifty. Full Cricket Scorecard, England vs Pakistan , 4th Test match

Younis Khan who came in after Azhar Ali’s wicket took lot of time to settle in. Alastair Cook tried various variations with his bowling department, wherein he sometimes put in a seamer from one end and spin from the other. But both the batsmen have looked very comfortable playing the various variations they were made to play against. ALSO READ :Time for Younis Khan to rise for one final time in England

Asad Shafiq has been the star of the session for Pakistan as he has made them reach at a respectable position after two sessions of the day. Younus Khan got into his stride slowly and was seen jumping around the crease to avoid the short balls from English seamers. Anderson was the only one from the English side who posed a few questions but the pressure was released from the other end due to some mediocre stuff, especially from Finn. Even Moeen Ali did not get much off the surface, despite conditions being pretty sunny and bright. ALSO READ:Moeen Ali: England’s unsung hero in Tests

Pakistan will again want these two to continue with their batting as they have scored 99 runs in this session and are still trailing England by 132 runs. Pakistan just need to carry on from here and avoid what they always do, collapse within minutes. England, on the other hand, have seen enough in the series and know that they are always just one wicket away from making a comeback. 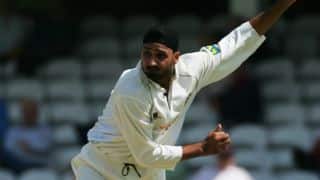 Harbhajan Singh likely to opt out of Duleep Trophy 2016