Sri Lanka ended their first innings at 355 after Rangana Herath was injured on Day 2 of Third Test at Sinhalese Sports Club in Colombo on Sunday.

In response to Sri Lanka’s 355, Australia reached 27 for 1 at Tea on Day Two of Third Test at Sinhalese Sports Club in Colombo on Sunday.  David Warner and Shaun Marsh provided Twenty20 (T20) start to the innings earlier; just then Warner was nicked by the star of Sri Lanka, Dhananjaya de Silva, who drew the first blood. Warner and Shaun Marsh built strong partnership of 13 runs, that stood as the highest opening partnership in this series. Skipper Steven Smith and Shaun were playing at 4 and 8 respectively, before heading for Tea. Smith is just 18 runs away from reaching his personal milestone of 4,000 Test runs. Earlier, Mitchell Starc’s bowled out Sri Lanka for 355 leading to Rangana Herath’s injury. Dinesh Chandimal and de Silva’s century built the momentum for Sri Lanka, keeping them in command of Day One and Day Two of Third Test. FULL CRICKET SCORECARD: Sri Lanka vs Australia, 3rd Test at Colombo

Earlier in first session, Chandimal scored a defiant century to power Sri Lanka to 299 for 7 at Lunch on Day 2 of the third and final Test against Australia. Chandimal’s overnight partner de Silva advanced from 116 to 129 before falling in the first hour, but not before the pair had rescued the innings with a 211-run partnership for the sixth wicket after coming together with Sri Lanka at 26 for 5. Chandimal, scoring his seventh Test ton, remained unbeaten on 105 at the break with strong support from Herath on 14. Chandimal and de Silva started the second day cautiously, playing out three straight maiden overs, but soon gained momentum after hitting a couple of boundaries. Australian pace spearhead Starc and Lyon, who wreaked havoc in Sri Lanka’s top order on Saturday, have taken three wickets each. LUNCH REPORT: Chandimal’s century guides Sri Lanka to 299/7

On Day 1, de Silva scored his maiden Test century Saturday to steer Sri Lanka’s revival from a precarious position to 214 for 5 at stumps against Australia. De Silva and Chandimal put together an unbeaten 188-run partnership for the sixth wicket to thwart the Australian bowling attack after Sri Lanka were reduced to 26 for 5 while batting first in the third Test. De Silva continued his gritty innings by reaching 116 at close, with strong support from Chandimal, who scored his 11th Test half-century, batting on 64.  Sri Lanka, who took an unassailable 2-0 lead in Galle, have a great chance to register their first whitewash against a major team since gaining Test status in 1981. 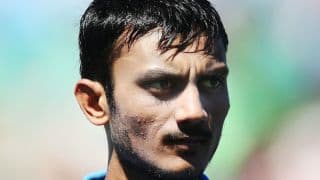