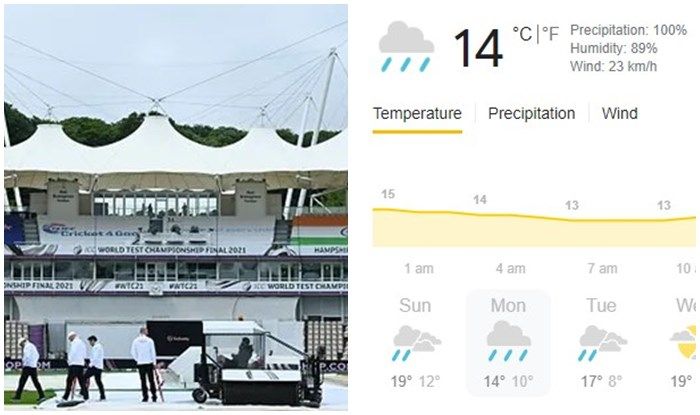 All India could manage on Day 3 at Southampton was 71 runs as they lost six wickets. Kylie Jamieson with five wickets for 31 runs was the star for New Zealand. India posted 217 and then the NZ openers – Tom Latham and Devon Conway – got the side off to a steady start. Eventually, Ravichandran Ashwin broke the 70-run stand between the two when he dismissed Tom Latham for 30.

If you thought the first three days were disappointing in terms of the weather at Southampton, Day 4 looks worse. The forecast suggests that rain is inevitable and that should be extremely disappointing for fans who have waited long to watch their favourites go head to head. The humidity would also be on the higher side which would make things uncomfortable for players – that is if play takes place.

In case the game does not end in five days, the match will enter the reserve day. Initially, the priority will be to finish the game within five days by adding some extra overs to the gameplay if the conditions are suitable. The reserve day will not take place in case of completion of overs and at the same time match will end in a draw. Both teams will be declared as co-winners in that case and the reward money will be distributed equally.