India lead the four-Test series 1-0 and a win in this match would ensure them a series win as well, before they head fort the final encounter at Port-of-Spain.

India ended the second session at 31 for 0, with a lead of 159 runs over West Indies as the home team had a mini collapse after lunch on Day Four. At one stage, they were 202 for 4 but got reduced to 212 for 8 which caused their downfall. They eventually got all out for 225. The pick of the bowlers from India were Bhuvneshwar Kumar, with a five-for, and Ravichandran Ashwin, whose regular breakthroughs dented the home team’s effort. India will now like to press hard on their opponents after a whole day’s play was abandoned by rain on Day Three. At present, India lead the four-Test series 1-0 and a win in this match would ensure them a series win as well, before they head fort the final encounter at Port-of-Spain. Full Cricket Scorecard: India vs West Indies, 3rd Test match

West Indies started the day with opener, Kraigg Brathwaite and Darren Bravo starting the proceedings for them. The partnership was son broken by Ishant Sharma as he got the wicket of Bravo but a steady partnership between Marlon Samuels and Jermaine Blackwood ensured ta fightback from the hosts. After India broke the pair’s resistance, they rattled through the hosts’ lackluster lower-order in no time to get a lead. No one from their lower-order took responsibility and wickets fell like nine pins. Full cricket updates: India vs West Indies, 3rd Test, Day 4

Openers, Shikhar Dhawan and KL Rahul played some overs, without losing wickets, to ensure their side dominated the entire proceedings. India would like to get some quick runs in the remaining overs of the day and prevent the slide their top-order experienced in the first inning on Day One. The sinking ship of the visitors was lifted by Ashwin and Wriddhiman Saha’s twin centuries which pushed India past the 350-runs mark and ensured they came out of troubled waters. The match can still produce a result, after a day’s play being washed out, if India bat aggressively and impose pressure on the West Indies team in the final innings. 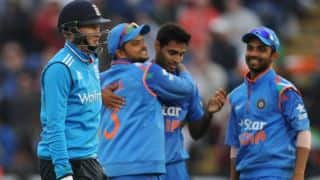