India going into lunch are just 7-wickets away from a memorable series win against the West Indies after setting the hosts a target of 346 runs on fifth and final day of third Test at St Lucia.

India continued their outstanding performance on Day Five of the third Test against West Indies at the Darren Sammy International Stadium. West Indies were asked to chase down 346 runs to win and level the 4-Test series. Indian bowling trio of Mohammed Shami, Bhuvneshwar Kumar
and Ishant Sharma startled the West Indies batting line-up early into their fourth innings. With as many as three wickets down West Indies are clearly in trouble. Shami started the procession for West Indies getting opener Leon Johnson for a duck. Johnson was unlucky to have a well time flick find Rohit Sharma standing at forward short-leg. West Indies went into lunch at 53 for 3  , were survived by Darren Bravo and Roston Chase unbeaten on 26 & 10 respectively, still needing 293 runs to win. Live Cricket Scorecard: India vs West Indies, 3rd Test match

Bhuvneshwar continued his splendid run with ball, got the price wicket of Kraigg Brathwaite for 20. Brathwaite looked to play across the line to Bhuvneshwar, who after bowling out-swingers, got the ball to straighten from the off stump line and trap him for a plum leg-before. Marlon Samuels who the West Indies would have hoped to see some resistance and application, looked completely out of sorts during his 27 ball stay. Ishant Sharma cleaned up Samuels for 12, who tried to heave him away for a glory shot only to have his off stump knocked out of the ground.  Bravo and Chase brought some normalcy back to the West Indies’s innings striking a 18 run stand for the fourth wicket.

Earlier in the session, Virat Kohli declared the Indian innings at 217 for 7, leaving West Indies to chase 436 runs to win. Rohit Sharma and Ajinkya Rahane resumed batting from their overnight score of 157 for 3. Rohit departed early without adding a single run to his score of 41, while Rahane remained firm to remain unbeaten on 78. Miguel Cummins accounted for six out of seven Indian wickets which fell in the second innings. His tally hailed of wickets like Rahul, Kohli, Rohit, Wriddhiman Saha, Ravindra Jadeja and Ravichandran Ashwin. 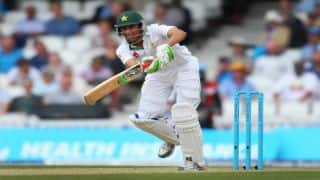 Day 3 Tea report: Pakistan all out at 524 against England in 4th Test 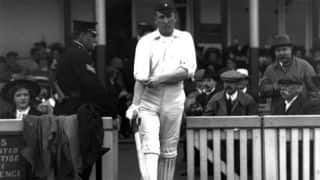