England were dismissed for 246 on the first day of the fourth Test against India at Southampton on Thursday. They were in dire straits at 86 for six before Sam Curran's Test-best 78 revived the innings. Jasprit Bumrah led India's attack with three wickets for 46 runs. In reply, India were 19/0.

On a pleasant, cool afternoon in Southampton, Joe Root won this fourth toss in a row and had no hesitation in opting to bat as the fourth Test got underway at The Ageas Bowl on Thursday.

However, England were dismissed for 246 on the first day of the fourth Test against India at Southampton on Thursday. They were in dire straits at 86 for six before Sam Curran’s Test-best 78 revived the innings. Jasprit Bumrah led India’s attack with three wickets for 46 runs. In reply, India were 19/0.

After Joe Root chose to bat on a true deck with a slight grass cover, England were reduced to 15/2 inside eight overs (Getty Images)

Bumrah then over-stepped to give Root a reprieve on 4. The ball was headed straight for leg stump, but another no-ball from Bumrah was a major frustration for India (Getty Images)

As it turned out, it did not cost them a single run. Without adding to his score, Root was out lbw to Ishant, courtesy a very fine delivery that came on with the angle and beat the England captain (Getty Images)

Jonny Bairstow, playing purely as a batsman, lasted 16 balls before he was made to play at another lovely ball from Bumrah which pitched, straightened and took the edge (Getty Images)

After Ishant bowed out with a terrific opening spell of 6-3-7-1, Hardik Pandya came on ended Cook s 55-ball vigil on 17 (Getty Images)

Rishabh Pant s drop of Jos Buttler when he was 11 also did not cost India much, for on 21 Mohammad Shami found the batsman s edge and Virat Kohli, at third slip, took another good catch (Getty Image)

Ben Stokes applied himself watchfully for 78 balls, but then got an in-cutter from Shami that hit on the flap. Stokes reviewed, the on-field decision by Bruce Oxenford stood and England slumped to 86/6 (Getty Image)

Then, Moeen Ali and Sam Curran dug in and combined for an 81-run stand to take England of the hole (Getty Image)

Ali made 40 before he became Ravichandran Ashwin s first victim of the day when he went for a big sweep off a fuller delivery only to top edge. Jasprit Bumrah completed a good diving catch (Getty Image)

Maintaining the flourish that saw him claim the Man-of-the-Match honours at Edgbaston, Curran picked up from where he left off at Lord s with a wholly considerate fifty which belied his tender age (Getty Image)

Sam Curran was the last man out after scoring 78, when Ravichandran Ashwin picking his second wicket of the innings. England were bowled for 246 (Getty Image)

There is also the damning statement of 23 byes, with the rookie wicketkeeper Rishabh Pant forced to repeatedly fling himself left and right to stop errant deliveries from India s quicks. Extras contributed 34 to England s total, the third highest score. (Getty Image)

In four overs before stumps, India made 19 runs as the new ball continued to move wildly (Getty Image) 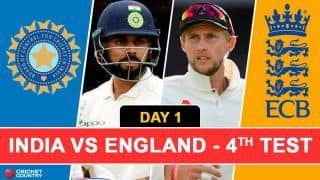