Fifties from skipper Shreyas Iyer and Shikhar Dhawan set base for a big total for Delhi Capitals, which was pushed to 187/5 courtesy Sherfane Rutherford's 28* off 13 balls against Royal Challengers Bangalore in Match 46 of IPL 2019 at the Feroz Shah Kotla, Delhi on Sunday.

Fifties from skipper Shreyas Iyer and Shikhar Dhawan set base for a big total for Delhi Capitals, which was pushed to 187/5 courtesy Sherfane Rutherford’s 28* off 13 balls against Royal Challengers Bangalore in Match 46 of IPL 2019 at the Feroz Shah Kotla, Delhi on Sunday.

After Iyer won the toss for DC, he opted to bat first, with RCB bearing the brunt of the 42 degree Delhi heat. And the Delhi openers – Dhawan and Prithvi Shaw – were in no mood to show mercy as the sped to 30/0 in the first three overs with Shaw helping himself to three fours while Dhawan got two sixes and a four. However, Umesh Yadav broke the threatening stand with a rising delivery that Shaw nicked to wickekeeper Parthiv Patel, who managed to hold on to the catch after the ball thudded onto his chest. Shaw went for 18 off 10 balls.

Dhawan and Iyer then drove DC with 68-run stand in 43 balls with Dhawan notching up his 38th IPL fifty. Both Dhawan and Iyer were clinical in taking on the spinners and used lack of pace of the Kotla track to good effect against the likes of Navdeep Saini and Marcus Stoinis. FOLLOW LIVE BLOG: DC vs RCB

At 103/1 in 12.1 overs, DC looked set for a big flourish, but slumped thereafter losing three wickets for just 26 runs with Yuzvendra Chahal getting rid of the well-set Dhawan, caught at short fine for 50 off 37 balls and then had Rishabh Pant trapped in front for seven. FOLLOW LIVE SCORE: DC vs RCB

Iyer reached his 14th IPL fifty, but departed soon after for 52 off 37 balls, caught at deep mid, off Washington Sundar. With two new batsman, and more critically, two foreign players in Colin Ingram and Rutherford, the run-rate dropped. Ingram departed for 11 off seven balls to hand Delhi boy Saini his first wicket of the day. But, Rutherford’s late blitz pushed DC’s target past the 180-run mark, as he combined for a stand of 46 runs with Axar Patel (6 off nine balls).

For RCB, Chahal picked up 2/41 his in four while Umesh, Sundar and Saini added one wicket each. 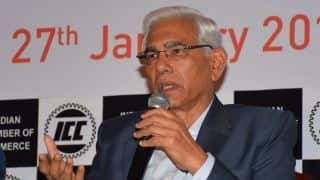