DDCA vice-president and former Test opener Chetan Chauhan is unhappy that a venue like the Firoz Shah Kotla has not been allotted a Test in the long home season.

New Delhi: DDCA vice-president and former Test opener Chetan Chauhan is unhappy that a venue like the Firoz Shah Kotla has not been allotted a Test in the long home season comprising as many as 13 five-day games. “We should have been given at least one Test if not two. It is a long season and Delhi is one of the permanent Test centres. I feel all centres which have been hosting Test matches for more than 50 years (like Delhi, Mumbai, Chennai and Kolkata) should get a Test every home season,” former India opener Chauhan told PTI. The BCCI follows a rotation policy for allotting games but officials in the DDCA feel the practice is not followed strictly all the time.

Kotla lasted organised a Test in December last year when India played South Africa. It was only game of the series that lasted five days. However, it will host an ODI featuring New Zealand in October. Chauhan also questioned the rising trend of producing rank turners against the visiting teams with matches winding up in less than three days. Citing Kotla’s example, the cricketer turned administrator said the only way to win crowd back into Test matches is by producing “good” wickets.

“You can’t have the ball turning from day one. It should be a good contest between bat and ball. Okay, you exploit the home advantage from day three onwards but you can’t have ball turning square from the opening day. It is not a good endorsement for Test cricket, which is already facing a stiff challenge from T20,” Chauhan added. 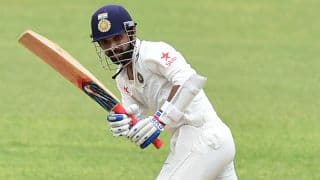 Ajinkya Rahane: 1st Test vs New Zealand at Kanpur will be crucial