Rabada, who had come in as a nightwatchman, was the only South African batsman to lose his wicket as the home team added 71 runs in 28 overs during the morning.

South Africa made steady progress on the second day of the second Test against Australia at St George’s Park on Saturday despite the distraction of disciplinary issues. Fast bowler Kagiso Rabada faces a hearing on Saturday that could result in a ban from the third Test against Australia. Rabada, who devastated the Australian batting order on the first day, has been charged following an incident with Steve Smith on Friday.

After winning a leg before decision against the Australian captain, Rabada shouted in celebration and approached Smith aggressively. Their shoulders made contact. If found guilty, Rabada could be fined as much as 100 per cent of his match fee and, because of previous offences, might be suspended from the third test of what is proving an ill-tempered series.

Rabada, who had come in as a nightwatchman, was the only South African batsman to lose his wicket as the home team added 71 runs in 28 overs during the morning. He was bowled by Pat Cummins for 29.

South Africa reached 110 for two at lunch in reply to Australia s first innings of 243. Opening batsman Dean Elgar played watchfully and was on 38 not out after facing 108 balls. Cummins won an lbw decision against Hashim Amla when the batsman was on seven but the decision, by substitute umpire Sunderam Ravi, was overturned on review when the ball was shown to have struck Amla outside the line of the stumps.

Amla, struggling for form after a poor one-day series against India and dismissals for nought and eight in the first Test in Durban, was 31 not out. Ravi was standing in place of Chris Gaffaney, who fell ill overnight. In contrast to the first day, the weather was bright and sunny and the pitch appeared to be offering less help to the seam bowlers.

Australian off-spinner Nathan Lyon was gaining turn and bounce, however, and Elgar looked awkward against him. 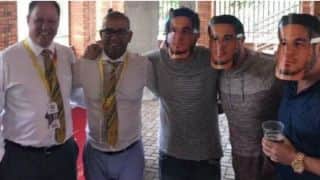 Sri Lanka vs Bangladesh 3rd T20I Nidahas Trophy 2018 Live Streaming, Live Coverage on TV: When and Where to Watch