This wicket of Faf du Plessis has come just at the right time for New Zealand but the presence of Elgar can still be intimidating to them.

South Africa finished the second session at the score of 153 for 4 in the first Test against New Zealand at University Oval, Dunedin. Opener Dean Elgar and skipper Faf du Plessis constructed a vital 126-run stand for the 4th wicket which saw the visitors climb out of a tough spot. This was the only wicket New Zealand managed to get but was a very important as both batsmen looked to take the game away from them. Jimmy Neesham who has been included in the squad as an all-rounder and third pacer got the necessary breakthrough. At the stroke of tea, South Africa have their opener Elgar leading the run-scoring with unbeaten 92 along with Temba Bavuma (0*) who has just walked in after his captain s dismissal. LIVE SCORECARD, New Zealand vs South Africa: 1st Test

Resuming from the score of 63 for 3 from the first session, the visitors started the second session on a cautious note. The big moment came on the first ball of the Trent Boult s over in the second session. Boult strayed down the leg side, which Elgar tried to nudge past wicketkeeper, BJ Watling. But Elgar failed to nick the ball managing a faint edge which Watling spilt. Elgar was on 36 when this incident took place. But then, both Elgar and du Plessis didn t give another chance to the Kiwi bowling department. Du Plessis looked optimistic with his footwork against Jeetan Patel and Mitchell Santner, whereas he shuffled across the crease very well against Wagner and Boult.

Elgar’s hard work started to pay off as boundaries slowly came his way and du Plessis grew in confidence. Amidst all this, Elgar scored his 6th Test fifty which came off 124 deliveries while du Plessis got his 10th Test fifty in 111 deliveries. They both first negated the spinner s i.e Patel and

The wicket was drying out as the day progressed and the bowlers weren t getting the same assist as they did in the first session. Hence the Kiwi quicks tried hard by bowling full deliveries searching for the swing, but being out in the middle for a long time du Plessis and Elgar took full advantage of such deliveries dispatching the ball beyond the boundary rope. Jimmy Neesham, too, was introduced in the attack but not yielding any positive results for the hosts. Neesham conceded 12 runs in his first over as Elgar bashed him to boundaries.

But Williamson carried on with Neesham. Coming in his second over having conceded three boundaries, Neesham bowled with an excellent amount of pace. He clocked the first delivery at ar0und 1509 kmps which struck du Plessis in his pads. On-field umpire Kumar Dharmasena termed du Plessis out but the visiting team s captain opted for DRS instantly. The reply showed du Plessis having got an inside edge before the ball struck the pads. But, Neesham banged one short well outside off which du Plessis went fetching and managed to top-edge it to deep square leg where Boult managed to take an easy catch moving just two steps to his right. This wicket saw a vital 126 runs partnership of 40 overs ending just moments before the end of the second session.

This wicket has come just at the right time for New Zealand but the presence of Elgar can still be intimidating to them. 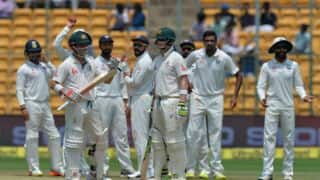