South African part-time bowler Dean Elgar claimed as many as four wickets to leave India waddling at 168 for seven at tea, in their first innings of the opening Test which began on Thursday. Elgar claimed the wickets of Cheteshwar Pujara, Ajinkya Rahane, Wriddhiman Saha and Amit Mishra, registering his career-best figures. India collapsed against the South African spinners on a spin-friendly track they had asked for, and now face the risk of being bowled out for less than 200 in their first innings. India had won the toss and elected to bat, a decision which they failed to work in their advantage at the Punjab Cricket Association (PCA) Stadium in Mohali. Live Cricket Scorecard: India vs South Africa 015, 1st Test, Day 1 at Mohali here

Murali Vijay’s 12th half-century in Test cricket and second against South Africa has been the only bright spot for India, who produced a hapless batting performance on the first day of their return to their backyard. It is after two long years that India are playing Test cricket at home, but that assuredness of playing at home was certainly missing from the Indian batsmen. Live Cricket Blog & Updates India vs South Africa 2015, 1st Test at Mohali, Day 1

In this first Test, both India and South Africa decided to field as many as five bowlers. While India decked up their bowling attack with three spinners in the five-pronged attack, the South Africans decided to go ahead with three pacers. Alongwith Rabada, South Africa have Dale Steyn and Vernon Philander in their attack. They also gave two spinners in Simon Harmer and Imran Tahir. 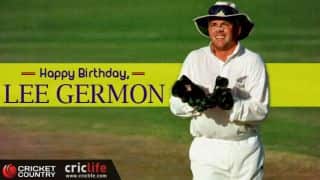