Delhi Daredevils (DD) put up a thorough professional performance as they thrashed defending champions Chennai Super Kings (CSK) by eight wickets in a lopsided contest in the Indian Premier League on Tuesday. 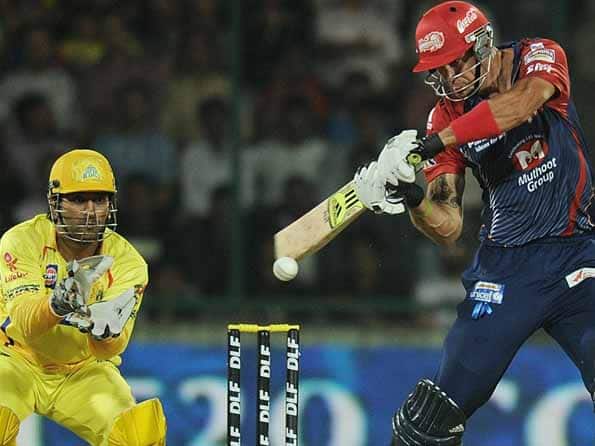 Delhi Daredevils (DD) put up a thorough professional performance as they thrashed defending champions Chennai Super Kings (CSK) by eight wickets in a lopsided contest in the Indian Premier League on Tuesday.

After the Delhi bowlers kept Mahendra Singh Dhoni and Co under wraps restricting them to a modest 110 for eight, the home batsmen made short work of the target knocking off the runs in only 13.2 overs to register their second win of the tournament.

Virender Sehwag was in blazing form as he set the tone with a typically aggressive 21-ball 33 that was laced with six and four boundaries.

The six was a typical Sehwag shot as he lofted Albie Morkel over extra cover. Naman Ojha had hit three boundaries in the first over as Daredevils never looked back.

Kevin Pietersen took over from where Sehwag left as he smashed an unbeaten 43 off 26 balls (3×4, 2×6) adding 61 runs with Mahela Jayawardene (20 no) to finish off the proceedings with 40 balls remaining.

Earlier, a disciplined bowling effort backed by some woeful running between wickets by opposition batsmen helped the Daredevils restrict defending champions to a modest total.

With as many as four CSK batsmen being victims of horrible misunderstandings, Virender Sehwag’s bowlers also responded well by keeping the batsmen under tight leash.

While Morne Morkel returned with best figures of 2/19 from fours overs, it was spin twins Roloef van der Merwe (4-0-15-0) and young Shahbaz Nadeem (3-0-9-0) who gave away only 24 runs in their seven overs to set the match up for home team.

Delhi skipper Sehwag won the toss and rightfully elected to field first as the wicket had a bit of juice and there was enough for the home side bowlers to exploit the windy conditions.

Chennai got off to worst possible start as Murali Vijay (0) became victim of a terrible mid-pitch mix-up with Faf du Plessis and was run out on the very first ball of the innings.

Du Plessis just tapped the ball and sold a dummy to his partner as he got off the blocks only to retreat back.

Poor Vijay ran three quarters of the pitch and by then had no chance of making it back as Jayawardene whipped off the bails.

Du Plessis (15) played a couple of punchy shots through the cover region but paid for his impetuosity as he tried to cut Morkel but Roloef van der Merwe took a fine low catch at cover.

Suresh Raina (17) made his intentions clear from the outset as he first hit Pathan for a huge six over deep mid wicket and then pulled a short one from Umesh Yadav over fine leg.

But Raina’s dismissal was an example of horrible running between the wickets by the men in yellow he was caught a foot short off his crease after taking off for a quick single but failed to beat Yogesh Nagar’s accurate throw onto the stumps and wicketkeeper Naman Ojha completed the dismissal.

Subramaniam Badrinath was scratchy to begin with but then tried to break the shackles with a lovely six off Pietersen over mid-wicket, but was the third batsman to be run out.

‘Million-dollar baby’ Ravindra Jadeja (13), failed to deliver as he was brilliantly caught by Ojha as he dived to his left to snap a fine one-handed catch.

Credit should be given to Ven der Merwe and Nadeem as they bowled brilliantly in tandem. Between 10-15 overs, CSK could manage only 15 runs with Indian captain Mahendra Singh Dhoni (11, 18 balls) and Dwayne Bravo (22, 31 balls) found it difficult to hit the big shots.

While the pacers found good carry, there was something in it for the spinners too as the ball was stopping and coming onto the bat.

With both failing to accelerate, a frustrated Dhoni’s woeful IPL continued as he tried a wild heave only to be holed out long-on off Morkel’s bowling.

Bravo’s sedate knock ended when a delivery from Umesh kept low and was bowled.

The match started half-an-hour late due to rain and wet outfield in the evening and some technical issue due to the lights behind the sight screen.(PTI)

Man of the Match: Morne Morkel