Bangalore will depend a lot on it's top order to pile a big score and chase a big total.

Two batting heavyweights, Delhi Daredevils (DD) and the Royal Challengers Bangalore (RCB) clash against each other on Thursday in the second match of the Indian Premier League (IPL) 2014 at the Sharjah Cricket Association Stadium.

Watch live streaming of the IPL 2014 match between DD and RCB on GoCricket and Star Sports.com.

The big news before the game is that Kevin Pietersen has been ruled out of the match due to a finger injury. In his place, Dinesh Karthik will take over the reins of leadership and this will be some task for him. There are many international heavyweights in the side and it would be interesting to see whom Delhi pick as they have many options. Karthik will have a bigger role to play with Pietersen out of the game as there would be the added burden of captaincy. Some of the key batsmen for Delhi in the batting department are Murali Vijay, JP Duminy and Ross Taylor.

Bangalore have a settled top five. Chris Gayle is the main weapon and they would hope he fires soon in this tournament. In all likelihood, Parthiv Patel will open the batting with Gayle and he would be someone who may perhaps hold one end. And then comes the formidable middle-order in AB de Villiers, Virat Kohli and Yuvraj Singh. 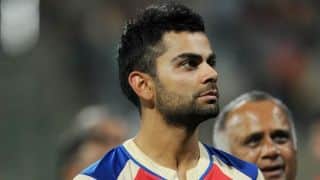