Delhi Daredevils lost their first wicket as Shreyas Iyer was dismissed by Sandeep Sharma in the Indian Premier League (IPL) 2015 Match 10 against Kings XI Punjab. Mayank Agarwal was not out at the middle with JP Duminy being the new batsman. Live Cricket Blog and Commentary: KXIP vs DD IPL 2015 Match 10

Earlier, Kings XI Punjab posted 165 for the loss of seven wickets. Opener Virender Sehwag (47) and Wriddhiman Saha (39) scored the bulk of the total. KXIP were provided a decent start through Sehwag and Murali Vijay (19). And even after Vijay’s dismissal in the fifth over, they continued their run flow.

The second-wicket partnership of Sehwag and Saha played sensibly to build a strong platform for Punjab to capitalise in the death overs. But as they tried to up the ante, seasoned leg-spinner Amit Mishra (3 for 41) struck to send Saha back to the pavilion. But that did not deter Sehwag, who launched the Daredevils skipper for a huge six over mid-wicket but perished off the next ball trying to hoick him again, only managing to offer a catch in the deep. Live Scorecard: KXIP vs DD IPL 2015 Match 10

The two quick dismissals brought South African David Miller (5) and Australian Glenn Maxwell to the crease. Maxwell (15) struck two huge sixes but was soon talking the long walk back after mistiming a similar big shot. Miller departed soon after and Daredevils by then had lost the momentum in their bid to score rapidly and mustered to score only three runs off the last over bowled by South African leggie Imran Tahir(3 for 43). KXIP vs DD, Free Live Cricket Streaming Online on Star Sports: IPL 2015, Match 10 at Pune 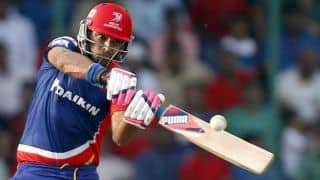