Delhi Daredevils batting failed once again as they were restricted to 114 for eight in 20 overs by Sunrisers Hyderabad in their Indian Premier League (IPL) match at the Kotla. 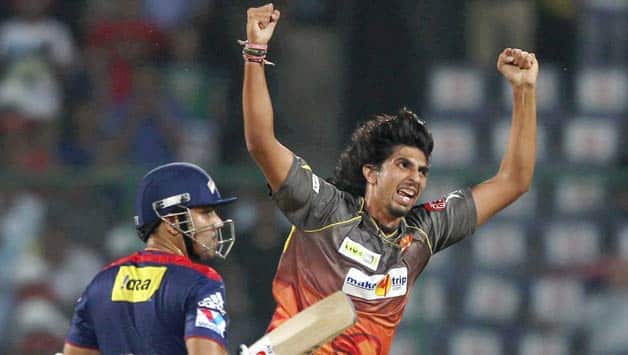 Ishant Sharma (right) picked up two wickets on consecutive deliveries, including that of the dangerous Virender Sehwag, who returned from injury © PTI

Delhi Daredevils batting failed once again as they were restricted to 114 for eight in 20 overs by Sunrisers Hyderabad in their Indian Premier League (IPL) match at the Kotla.

There was an electric buzz around the Feroze Shah Kotla before the game began, as their dashing favourite Virender Sehwag was expected to play after recovering from a back sprain. Captain Mahela Jayawardene let the cat out of the bag at the toss, revealing that Sehwag would be replacing the struggling Unmukt Chand, who has been dismissed for two ducks so far.

A Virender Sehwag-David Warner opening partnership was the stuff of dreams and it was something Delhi had been waiting for, after their three unsuccessful openings with Chand at the top. However, it made no difference to a rapid-fire Dale Steyn (two for 11) who ensured that Delhi’s opening batsmen’s romance with ducks continued. David Warner perhaps did not expect such pace from Steyn as he tried to swing him to the boundary, at his own peril. The ball took the edge and looped to mid-on where Anand Rajan took an easy catch.

Jayawardene walked in to a familiar setting, with his team one down for no runs. The Sri Lankan set things straight by delightfully flicking Ishant Sharma for six over mid-wicket to get Delhi going. Sehwag, meanwhile, lashed out at a wide delivery in his usual approach, got the edge which went flying past slip for four, as Ishant conceded 12 in his first over.

The lanky Indian pacer was, however, back with a vengeance in his next over as he sent Jayawardene and Sehwag packing one after the other on consecutive deliveries. Delhi found themselves at 26 for three and staring down a loaded barrel.

Manpreet Juneja and Johan Botha looked to have steadied the batting, putting on 18 runs for the fourth wicket, before the latter tried to cut Anand Rajan over point, but failed. Irfan Pathan walked in at No 6 and put on 21 with Juneja before the latter was scalped by Amit Mishra.

Kedar Jadhav came in at 65 for five in the 14th over as Delhi prepared themselves to get bowled out for a sub-120 total. The attacking batsman, who plays for Mahatashtra in the Ranji Trophy, did not curb his instincts as he launched Ishant for a four and six off successive balls.

Just when you thought Delhi would get past 120, Irfan Pathan (23) perished via his trademark front-foot flick trying to clear deep mid-wicket, but found the fielder. Delhi lost two more in quick succession as Jadhav found himself stranded. However, the wicketkeeper-batsman did not lose hope and clobbered Thisara Perera (two for 31) for a six and a four in the last over to take Delhi to 114.

The Sunrisers would be very pleased with their bowling effort. Delhi’s haplessness was highighted by the stat that Steyn had bowled 17 dot balls in his four overs. This pitch, which was soft since the start, would ease out in the second innings, as pointed out by Ishant in the post-match chat. Delhi would do well to avoid a fourth consecutive defeat.