In the the 16th match of the Indian Premier League (IPL) match between Delhi Daredevils (DD) and Mumbai Indians (MI), Delhi bowlers bowled creditably to tie Mumbai for the better part of the game before useful cameos from CM Gautam and Harbhajan Singh with Kieron Pollard lifted the defending champions to 125 for six. All the Delhi bowlers chipped in with useful contributions and have put themselves in a good position to notch up their second win of IPL 7.

Rohit Sharma’s men made a cautious start in the first over, which was by the wily left-arm spinner Shahbaz Nadeeem tying the batsmen down and there and then, Mumbai’s approach was on the defensive and showed a lack of confidence that in is prevailing in the defending champions’ camp.

Rohit and his opening partner Aditya Tare have misfired in the three matches they have played so far and the duo were looking for singles in the early overs. On one such occasion, the batsmen tried to cross over for a risky single and Rohit was far too late to get off the block and was caught short of the crease by bowler Mohammad Shami’s direct hit. Tare’s brief stay at the crease was ended by a pull short that that found the solitary man stationed in the deep and Quinton de Kock made no mistake of that effort.

After losing two early overs in the early overs, Mumbai now needed the dud of the tournament Corey Anderson and Ambati Rayudu to stablise the innings but Jaydev Unadkat put the brakes on the scoring yet again. A short delivery enticed Anderson to go for the pull and in what was a dismissal identical to Aditya Tare, Anderson didn’t get the distance on his sweep short and it fell straight to the palms of de Kock yet again.

The spinners were tidy and there was a purpose and ambition about the Delhi unit and most importantly they had pouched all the catches so far. JP Duminy superlative show with the bat is reflecting on the ball as well and the Protea found plenty of turn and the batsmen found it difficult to read his flight. Spin would end up hurting Mumbai more as the Nadeem, growing in confidence with every game deceived Ambati Rayudu with the ball gripping the surface and he was caught at long on. With Mumbai crying out for their experienced stalwarts to rescue them, Michael Hussey’s yet again looked out of sorts and had his stumps in disarray by Unadkat’s excellent slow delivery and half of Mumbai’s power-packed side was back in the pavilion with 63 on the board.

Pollard was the lone hope for Mumbai and the burly West Indian took his own time to settle in after being out of cricket for the past few months. Looking to break the shackles, Pollard smashed a huge six over long on. CM Gautam gave good support after coming in and galvanised the scoring rate, which was looking as though Mumbai wouldn’t cross the hundred mark. Gautam, with some calculated improvisation and brave hitting got three boundaries of an Unadkat over. Gautam should have disappeared  in the final ball of the over after wicket-keeper Dinesh Karthik dropped a fairly regulation catch. Pollard lost grip of his bat a couple of times and in the confusion that ensued while the batsmen were running a couple.

Harbhajan aslo played  lovely cameo towards the end with a couple of lusty blows before retiring hurt. 57 runs came of the last five overs and it could turn out to be crucial for Mumbai’s hopes of not slumping to their fourth straight defeat. 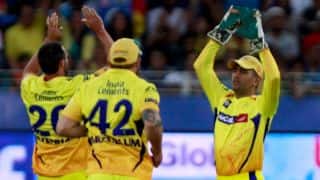