DD posted a good score thanks to fifties from JP Duminy and Quinton de Kock.

On a green surface, with overcast skies lurking, Virat Kohli won the toss and elected to bowl first. DD had to make one change to their side as Albie Morkel was out due to illness. Angelo Mathews replaced him. While DD have been knocked out of the tournament, this game still presented a glimmer of hope for Kolkata Knight Riders (KKR) as they needed the Duminy-led side to beat RCB by 140 runs to have any chance of going through to the next round.

Batting first, DD started off well with de Kock leading the charge with a stroke-filled innings of 69. He was particularly severe through the off-side and helped DD get off to a very positive start. In a 55-run opening stand that lasted for 6.2 overs, Iyer scored 20 and was the more sedate off the two. De Kock got to his fifty with an assault on David Wiese in the ninth over. IPL 215: Complete coverage

However, DD then lost a few wickets at regular intervals. De Kock holed out off Yuzvendra Chahal in the 12th over. Yuvraj Singh’s short stay ended after he smashed a six as he tried to go for another off Chahal, finding Mitchell Starc in the deep. Kedar Jadhav was dismissed first ball off Harshal Patel as he edged to the wicketkeeper. An over later, Angelo Mathews was dismissed as he was run-out while backing out of the non-striker’s end.

Through that passage of play, skipper Duminy was the only one who stood through and tried to maintain the tempo. He was managing the big hits and ensured that it did not fall apart. He managed to get his fifty in the 18th over as DD tried to push towards a good score with the rain clouds hovering. Duminy’s calculated assault in the last few overs made up for the slow progress in the middle.

Harshal Patel and Chahal were good for RCB as they took two wickets each. Their trump-card, Mitchell Starc, had an off day though had an off day by his standards as he went wicketless for 35 runs. 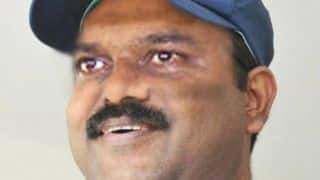