Currently, DD are 54 for the loss two wickets in eight overs with opener, Shreyas Iyer batting on 28.

Kolkata won by 6 wkts
Man of the Match: Umesh Yadav

Delhi Daredevils (DD) batsmen are looking to settle down and aim for a big total, despite losing two early wickets, against defending champions Kolkata Knight Riders (KKR) in match 17 of the Indian Premier League (IPL) 2015 at the Feroz Shah Kotla Stadium in Delhi on Monday. They also scored their 50, following the early loss of Mayank Agarwal for a single iand JP Duminy for five. Currently, DD are 54 for the loss two wickets in eight overs with opener, Shreyas Iyer batting on 28 and skipper, Manoj Tiwary on 12. LIVE Scorecard: Delhi Daredevils vs Kolkata Knight Riders 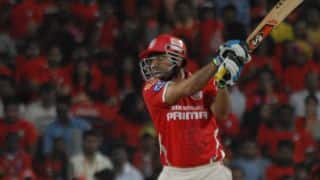