Delhi Daredevils won against Kings XI Punjab in the Match 7 of IPL 2016 by 8 wickets at Delhi on Friday.

New Delhi: Having guided Delhi Daredevils to victory with a stellar performance, leg-spinner Amit Mishra felt that it was opposition captain David Miller’s wicket that became the “turning point” as the other batsmen found themselves under tremendous amount of pressure. “I had some plans. I had watched some videos. I had discussed with Zak (Zaheer) how to get them out if they go for big shots. The plan was successful and I am happy,” Mishra told reporters after Delhi overhauled the 112-run target with 39 balls to spare. “I think the wicket of Miller was the turning point because it created a lot of pressure on them. I am very happy that I got a purple cap on my 100th match,” said Mishra. FULL CRICKET SCORECARD: Delhi Daredevils vs Kings XI Punjab, IPL 2016, Match.

With 116 scalps, Mishra became the second highest wicket-taker in IPL history after Sri Lankan slinger Lasith Malinga. “We get an idea from the body language of the batsmen as to when they are thinking of going for a big shot but I think what is more important is that I got the wickets on those particular deliveries.” Asked why he was not given another over, Mishra, who returned with figures of 3-0-11-4, said:”The plan was to give the fast bowlers more overs. It will help them as they need to bowl more at the death in the next matches. The best thing for me is that I contributed in the team’s win.”

Asked about the importance of the win to the team morale, Mishra said:”There has not been any problem with team morale. We are working hard and we are happy to win today. In T20, anything can happen. Our focus has always been to play well and not think about win or loss. We will try and focus on improving ourselves in the next matches,” said Mishra. The 33-year-old said the wicket was not supportive but the slowness of the track did help him to take the four wickets. “It could have been a high-scoring game as well if we had not taken the wickets at regular intervals. I can’t say it was a supportive wicket but it was slow wicket so it was an advantage because we took wickets before they could gauge the track.”

Talking about Zaheer Khan’s initial spell, Mishra said: “Zaheer bhai has always been a wicket-taker bowler whenever he has played. His spell created a lot of pressure and it helped me. Because when spinners come to bowl, batsmen think that they will go after the spinners and it creates more chances of taking wickets.” 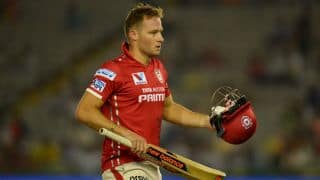