Dinesh Karthik failed to convert a start into a big total when he fell after scoring 12 off 16.

Delhi Daredevils (DD) reached for four after 17 overs in their Indian Premier League (IPL) 2014 Match 23 against the Rajasthan Royals (RR) at Ferozeshah Kotla Stadium in New Delhi on Saturday. The hopes of a strong total in the game are pinned on JP Duminy, who is batting on 19. Accompanying him is Kedar Jadhav on nine not out. Click here to follow the live blog of the Delhi Daredevils vs Rajasthan Royals in IPL 2014.

Dinesh Karthik failed to convert a start into a big total when he fell after scoring 12 off 16 balls. Karthik was caught by Stuart Binny off James Faulker on the second ball of the 16th over. Karthik failed to hit a big scoring stroke in his innings.

Rajasthan Royals (RR) spinner Pravin Tambe struck in quick intervals to get rid of the dangerous Quinton de Kock and Kevin Pietersen to peg back the Delhi Daredevils. After a run-out controversy involving Delhi captain Pietersen, Rajasthan spinner Pravin Tambe struck twice in the 10th over of the match to peg back the hosts, who were going well till that moment in the match. While Pietersen was caught by Steven Smith near the boundary ropes, de Kock gave a return catch to the veteran spinner. Tambe did well to put his side back in the game.

In the fifth over, Vijay tried to loft Murali Vijay over the top and merely scooped it high in the air and was taken by Shane Watson at mid-off. Kevin Pietersen has walked out to bat and Quinton de Kock is in the centre. In six overs, Delhi are 46 for one. Earlier, Shane Watson won the toss and elected to bat. Delhi made one change as Rahul Sharma came into the side in place of Laxmi Ratan Shukla. On the other hand, Dhawal Kulkarni replaced Iqbal Abdulla for Rajasthan. 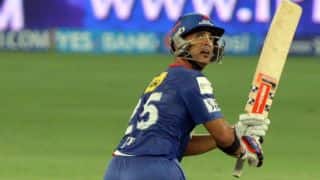