Ajinkya Rahane has performed well for Rajasthan Royals once again.

# Delhi have won just two games out of the last ten contested at the Ferozshah Kotla, New Delhi.

# Rajasthan have won seven and lost six out of 13 contested against Delhi at the IPL – success rate 53.84 per cent.

# Delhi have lost seven tosses in succession in the IPL for the first time. Their tally includes all six in the present edition.

# Pravin Tambe, with nine wickets (ave.16.88) in six matches, is the leading wicket-taker for Rajasthan in the IPL 2014.

# Karun Nair (73 not out) has recorded his highest ever score in T20 – his second fifty.

# Nair has got his first Man of the Match award in the IPL.

# Rajat Bhatia has batted at number four for the first time in the IPL,

# Dinesh Karthik’s tally of 18 stumpings in 98 matches is exceeded only by Mahendra Singh Dhoni in the IPL – 19 in 102 matches. 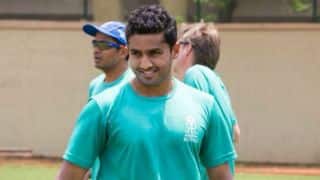