DD and RCB will go into this match after having won their previous matches against SRH and KXIP respectively.

Delhi Daredevils (DD) and Royal Challengers Bangalore (RCB) will lock horns in Match 56 of Indian Premier League (IPL) 2016. The venue of the match is Shaheed Veer Narayan Singh International Stadium at Raipur. RCB have 14 points from 13 games. They won six and lost the remaining seven. Delhi, on the other hand  have played same number of matches and have equal victories and losses. But owing to a better net run rate, RCB are ahead of them. RCB have a net run rate of +0.930 while DD have -0.102. LIVE CRICKET SCORECARD: Delhi Daredevils vs Royal Challengers Bangalore, IPL 2016, Match 6 at Rajkot

Zaheer Khan will lead the Daredevils whereas Quninton de Kock will keep wickets for them. De Kock was good with the bat early on in the tournament. He will be hoping to regain that sublime form again. Talking of Royal Challengers, Virat Kohli will captain their side. KL Rahul is their wicketkeeper. Some very talented players will take on each other making the game pretty interesting. RCB have a very good batting attack with Kohli, AB de Villiers, Chris Gayle and Shane Watson. They will be capitalising on their batsmen to deliver the goods once again. At the same time, it will be crucial that their bowlers also give a good performance in the match. ALSO READ— Delhi Daredevils vs Royal Challengers Bangalore, IPL 2016, Match 56 at Raipur, Predictions and Preview: DD, RCB face off in a virtual quarterfinal clash

Delhi have some special bowlers in their ranks. The real battle will be between RCB’s batters and DD’s bowlers. Besides de Kock, Delhi also have the services of Shreyas Iyer, Carlos Brathwaite, JP Duminy and Sanju Samson in the batting department. Mohammed Shami, Amit Mishra and Imran Tahir are the major bowlers in their squad along with their skipper. 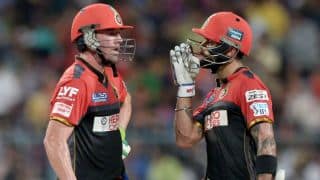