Struggling Delhi look to move ahead on home turf against Hyderabad.

Delhi Daredevils (DD) play Sunrisers Hyderabad (SRH) in the Indian Premier League (IPL) 2014 on May 10. This is Match 32 of IPL 7 and will be played in New Delhi at the Ferozshah Kotla. This is also the first match on Saturday as Mumbai Indians later host Chennai Super Kings in the night game. Delhi enter this tie bottom of the IPL 7 Points Table with only four points. Hyderabad have six points and sit in fifth position before Royal Challengers Bangalore’s match against Kings XI Punjab on May 9.

It has been another woeful season for Delhi so far in the IPL. Despite making wholesale changes to their roster for the seventh edition of the T20 league, Delhi have failed to find their feet. They won two matches in the UAE-leg of the IPL, but overall have been poor. Unlike most teams that are strong at home, Delhi are not. Since the IPL returned to India, Delhi have played three matches at the Feroz Shah Kotla and have lost all of them. All those three matches have seen good scores, but something has not clicked for them.

They have also batted first on all the occasions. If they do win the toss, bowling first could be an option to try out. Captain Kevin Pietersen’s form has also been a cause to worry. He has scores of 14, a golden duck and six. He looked mightily uncomfortable against Kolkata Knight Riders in their previous match and got run-out to end his misery at the crease. JP Duminy has been the shining light for the Daredevils throughout this season. But he comes far too down the order and is unable to spend more time in the middle. Coach Gary Kirsten must think of promoting his compatriot higher up the order.

Kedar Jadhav has also been amongst the runs, but he comes below Duminy so, there is something Delhi are not doing right. The constant promotion of Laxmi Ratan Shukla ahead of the in-form duo is not helping Delhi. Dinesh Karthik, Murali Vijay and Quinton de Kock have been scoring some runs, but they don’t particularly score quickly. That adds more pressure on Pietersen. The bowling has not been able to get wickets at a canter. In the last three, matches Delhi’s bowlers have only taken seven opposition wickets. That is not something which will win ensure victory.

Hyderabad too were on a miserable run, but managed to confound belief as they halted Rajasthan Royals on May 8. Their batting lacked purpose and the right attitude. But they have a bowling attack which is useful and effective. They only scored 134 for nine against Rajasthan, but bowled them out for 102 and thus winning by 32 runs. Captain Shikhar Dhawan looked in great touch as he breezed to a 20-ball 33. But the likes of Aaron Finch and David Warner were unable to score the runs. Hyderabad depend too much on these three to score the bulk of the runs and that is an issue.

The bowling with Dale Steyn, Bhuvneshwar Kumar, Amith Mishra, Karn Sharma and Irfan Pathan is capable of winning matches regularly. Moises Henriques also bowled well against Rajasthan. With the form Delhi are in at home and Hyderabad’s surprising win against Rajasthan, one would put their money on the latter to come away from the points. But Delhi would feel this is their last opportunity of keeping their dwindling chances of qualifying for the play-offs. A high-scoring match is not on the cards, but one can expect an intense one. 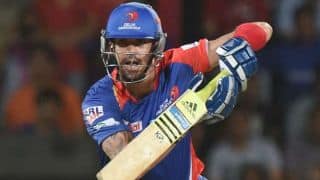 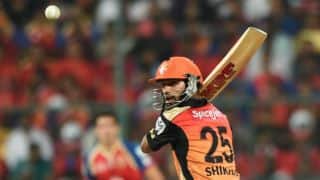