DD and SRH will look to make a push for a top four spot.

Delhi Daredevils (DD) and Sunrisers Hyderabad (SRH) will face off in the 45th match of the ongoing Indian Premier League (IPL) 2015 at the Shaheed Veer Narayan Singh International Cricket Stadium in Raipur, Chattisgarh, on Saturday, which will serve as the home venue for the Daredevils. While the match is crucial for both sides in order to stay afloat in the competition, a defeat for DD will almost certainly mean elimination. Eoin Morgan credits impressive showing against RR to hard work post-ICC World Cup 2015

The Delhi camp is facing a crisis-like situation at the moment, having lost seven of their 11 games in the tournament so far. With eight points in their kitty, they are the second-worst side as far as the points table is concerned. There have been problems aplenty for them, as far as team as well as individual performances are concerned. In their encounter against Kolkata Knight Riders (KKR), the bowling unit once again managed to let go of the momentum towards the latter stages of the opposition’s innings after gaining momentum at one point. IPL 2015: Sunrisers Hyderabad coach Tom Moody praises team after win over Rajasthan Royals

The bowling attack may have missed out on the services of Nathan Coulter-Nile, one of the more efficient bowlers in the attack, during the match against KKR. The Australian pacer is the only DD bowler aside from Imran Tahir to currently feature in the top ten bowlers list for most wickets in the tournament, having recently recorded figures of four for 20 in four overs that played a major role in the victory against Kings XI Punjab (KXIP). Why IPL 2015 is virtually over for KXIP, DD, SRH and MI

Among the batsmen, Yuvraj Singh was the biggest disappointment in the defeat to KKR, getting dismissed for a three-ball duck after scoring a hard-fought half-century in the previous game. The openers were in fairly good touch, with Manoj Tiwary partnering Shreyas Iyer in place of Mayank Agarwal, as the pair went on to put on a 63-run opening stand. DD are likely to retain that combination, along with the rest of the top and middle-order. Imran Tahir always puts in a 100 percent performance, claims JP Duminy

SRH, on the other hand, managed to narrowly escape from their encounter against Rajasthan Royals (RR) with a seven-run victory, that has now put them on the fifth position with five wins and an equal number of defeats, pushing Mumbai Indians (MI) to the sixth position in the process. While it may take some time before SRH breathe easy again, the recent win has given them some more space, and not put them in a fix such as the one that Delhi find themselves in right now. IPL 2015: Sunrisers Hyderabad can still qualify for play-offs, believes Tom Moody

For SRH, the biggest source of happiness is the return of Eoin Morgan to his destructive self with a 28-ball 63 against RR, making him the man to be marked out by Zaheer Khan and co. Shikhar Dhawan was flamboyant at the top of the order with a half-century. Skipper David Warner, who had an average outing against Rajasthan, will look to get the Orange Cap back in his possession aside from a century that has been eluding him so far in the ongoing tournament.

Among the bowlers, Bhuvneshwar Kumar will aim to repeat his feat of getting the early breakthrough for his side during the match against Delhi. Given the mental state that they are in, an early blow would create tremendous pressure on the rest of the batting order, which might cause the rest of the batsmen to crumble under the stress.

Raipur, DD’s second home and the 19th IPL venue, is a happy hunting ground for the Daredevils. In the two games that the venue has hosted in the league’s history, Delhi emerged victorious each time, defeating Pune Warriors India (PWI) and Kolkata Knight Riders (KKR) by 15 runs and seven wickets respectively in the 2013 edition of the IPL. 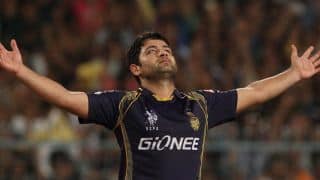