Government is studying the report of the three-member panel about functioning of the DDCA, the sources said.

New Delhi: In mounting trouble for Delhi District Cricket Association (DDCA), a Delhi Government-appointed probe panel recommended suspension of the capital’s cricket administrator by the Board of Control for Cricket in India (BCCI) for alleged irregularities and said an interim committee of professionals should be appointed to replace it. The report of the panel came on a day DDCA was struggling to meet BCCI deadline to get all required clearances from authorities by today to host the fourth Test match between India and South Africa commencing on December. The probe committee recommended appointing a professional body of cricketers to run cricket administration in the city and said a commission of inquiry should be set up to probe various alleged irregularities including financial bunglings in DDCA, government sources said.

They said the three-member committee, headed by Chetan Sanghi, Principal Secretary of Vigilance Department, also recommended bringing the cricket administration under the Right to Information Act to ensure transparency.

The panel felt its report should be handed over to the Supreme Court-appointed Justice R M Lodha committee, which probed IPL betting scandal. The Lodha Committee is currently working on its recommendations to reform the way the BCCI functions.

Government is studying the report of the three-member panel about functioning of the DDCA, the sources said, adding there was no relationship between hosting of the fourth Test match and inquiry into the cricket administrator’s functioning. As per Excise department, DDCA owes it Rs 24 crore as entertainment tax. A clearance by excise department was required to host the Test match at at Feroz Shah Kotla stadium.

The sources said excise commissioner is a quasi judicial authority and DDCA was free to go to the appellate tribunal and courts against the tax demand, claiming that government has no role on the issue. The sources said the city government feels sports is a state subject and it has power to bring law to ensure efficient running of sports in the capital.

The last three days have been one of twists and turns even as DDCA vice president Chetan Chauhan and treasurer Ravinder Manchanda met Chief Minister Arvind Kejriwal on Sunday. The entertainment tax is said to have not been paid since 2012 and the DDCA is hoping to get a tax waiver for the same. The BCCI has already kept Pune as a back-up venue in case the DDCA fails to meet the deadline for the match.

The probe panel was formed last week and it was asked to examine complaints of financial fraud and structural irregularities in DDCA among others. The DDCA vice-president and other board members had appeared before the probe committee and explained details about various issues. Recently, former Indian captain Bishan Singh Bedi and Madan Lal had met Kejriwal and requested him to intervene in “cleaning up” the DDCA.

Gautam Gambhir had also met the Delhi Chief Minister last week on the issue. Bedi has been critical of the DDCA and claimed last week that it was ill-equipped to host an international match with “rampant corruption” prevailing in the body. 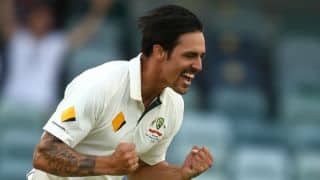