Deccan Chargers registered their second win in the Indian Premier League 2011 when they overcame the Delhi Daredevils at Feroz Shah Kotla by 16 runs. 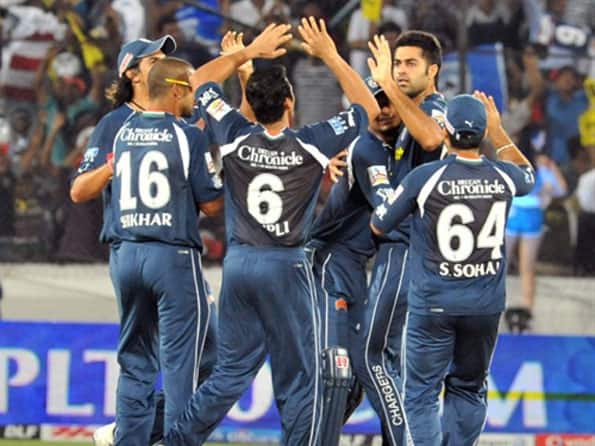 Deccan Chargers registered their second win in the Indian Premier League 2011 when they overcame the Delhi Daredevils at Feroz Shah Kotla by 16 runs.

Chasing 169 for a win, the Delhi Daredevils were provided a cracking start by Virender Sehwag. After David Warner had seen Dale Steyn off watchfully in the first over, Sehwag smashed three boundaries in the second off Dan Christian before Warner cut loose for another nine in the third.

Unfortunately for the Daredevils, the good start was nipped in the bud by Harmeet Singh s spell of two overs.

In the first, which was also the fourth of the innings, he had Sehwag cutting the ball straight to the point fielder and in his next over, Aaron Finch edged one to the keeper.

In between these two, there was more bad news for the Daredevils as Naman Ojha shuffled too much and was caught plumb in front of the stumps. Delhi were 38 for three after six overs and in much trouble. Venugopal Rao has often rescued the Daredevils in this IPL and he was at it again. Together with Warner, he took on the Chargers bowling.

A slower ball from Harmeet went terribly astray for five wides before Rao first paddled the ball away to the fence and then guided one to the boundary on the off-side. There were 16 that came off that over which was followed by 14 in the next from Ojha to bring the Daredevils back into the game.

Usually, it is the fall of a wicket that slows the run-rate down, but in this case, it was the strategic time-out that did the trick. Probably in a bid to not throw their wickets away, the pair scored only seven in the first over after the time-out, the 10th of the innings, but more vitally, managed just eight in the next two.

With the track slowing down and the asking rate up to more than ten per over, Rao hit Mishra for a four over the off-side but was caught brilliantly when he tried to smash the batsman over the long-off fence. Delhi were 90 for three in the 13th over at this stage.

Warner got to his half-century before he had an unlikely bowler getting him out in Shikhar Dhawan. With 70 needing in the last six overs, Warner was Delhi s final realistic hope.

With his dismissal and the tightening of screws by some tight end-overs bowling, the Daredevils failed to challenge the Chargers target, falling 16 short.

JP Duminy s lack of runs had him replaced by Cameron White while Harmeet Singh pushed Ishant Sharma out of reckoning. Pragyan Ojha was also called up for Manpreet Gony. Delhi had Morne Morkel and Yogesh Nagar for Matthew Wade and Umesh Yadav.

The Deccan Chargers got to 168 for four in their 20 overs thanks to the batting of Sunny Sohal and Kumar Sangakkara. The two were involved in a 92-run second wicket stand that came in 10.3 overs and seemed to have propped the Chargers to a solid base for the final assault.

Unfortunately for the side, the assault did not happen as anticipated, with only 78 coming off the last ten overs. That proved to be more than enough on a sluggish pitch.

Cameron White made an unbeaten 31 but Dan Christian s inability to get moving cost the side some runs at the end of the innings.

Earlier, the side had got to 43 in the first six overs of the innings before both, Sangakkara and Sohal waltzed 47 in the next four overs. Sohal s 62 came from 41 balls while Sangakkara missed his half-century by a run.

Man of the Match: Sunny Sohal