Delhi Daredevils skipper Virender Sehwag blamed the loss of four quick wickets for the visitor's 32-run defeat at the hands of Mumbai Indians in an Indian Premier League match at the Wankhede Stadium on Saturday. 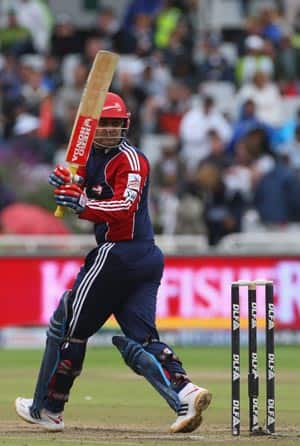 Delhi Daredevils skipper Virender Sehwag blamed the loss of four quick wickets for the visitor’s 32-run defeat at the hands of Mumbai Indians in an Indian Premier League match at the Wankhede Stadium on Saturday.

“We lost 4 wickets for 7 runs. At the end of the day we still scored 146 runs. It was an interesting game but (Lasith) Malinga bowled well and all the Mumbai Indians bowlers also bowled well,” he said at the post-match press conference.

“They took four quick wickets and after that it was difficult for the middle-order to win the game for the team,” said Sehwag after his team slumped to a 32-run defeat which has virtually dashed their hopes of entering the play-off stage of the Twenty20 tournament.

“The wicket was good. We did not bat well. We also did not field well. We dropped catches and there were midfields too,” he added.

Sehwag conceded it was difficult for a new batsman to face Sri Lankan pacer Malinga, who can bowl yorker length balls at will.

“It’s difficult for a player facing Malinga for the first or second time to pick him. Malinga is the kind of bowler who can give you early wickets and then another when he comes on to bowl again,” the Delhi captain said.

Malinga bagged two wickets for 18 runs and could not complete his quota of four overs as he had to be taken off after bowing two beamers.

Sehwag defended his decision to field first after winning the toss and explained the team had chased well in their last few matches.

“We won two games chasing last game. We chased 180,” he pointed out.

Sehwag did not see any chance of the Daredevils progressing to the May 24-25 play-offs after this loss.

“No chance. Difficult to advance now,” he said candidly.

He also came to the defence of his pace bowler Morne Morkel, who was hit for 49 runs especially by Aiden Blizzard who smacked him for five fours in the bowler’s second over.

“Even I did not score runs. He was bowling well in the last 2-3 games. It happens,” he said.

He also said that Irfan Pathan cannot be blamed for not scoring runs in the event as he was primarily playing as a bowler in the team.

“I think he (Irfan) is playing as a bowler,” Sehwag said.

He also praised Mumbai batsman Ambati Rayudu and said the young right-hander was a good prospect.