Shikhar Dhawan served a timely reminder to the national selectors with a brilliant century as Delhi defeated England by six wickets to hand the visitors their second successive defeat in warm-up games here today. 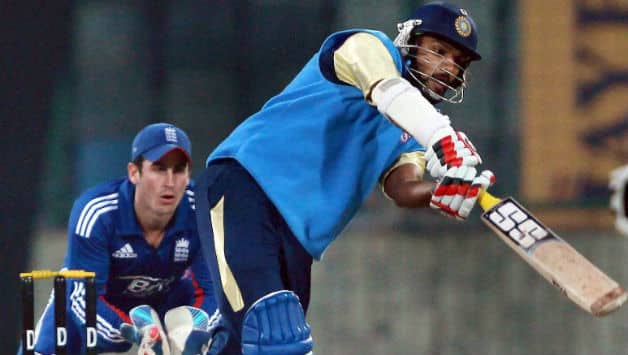 Shikhar Dhawan served a timely reminder to the national selectors with a brilliant century as Delhi defeated England by six wickets to hand the visitors their second successive defeat in warm-up games here today.

Chasing a difficult 294 for five set by England, Delhi rode on skipper Dhawan’s 110 and Milind Kumar‘s unbeaten 78 to overhaul the target with nine balls to spare.

Left-hander Dhawan, who last played for India in the West Indies, cracked his 110 off only 109 balls to set up a chase which initially looked difficult. He hit 13 boundaries and three huge sixes — one each off Jade Dernbach, James Tredwell and Stuart Meaker.

If Dhawan and Unmukt Chand (37) started the chase well, adding 98 for the opening stand, unheralded youngster Milind and veteran Rajat Bhatia (45 not out) finished off the run chase with a flourish as they smashed 103 runs off 72 balls.

The day, however, belonged to Dhawan who hogged the limelight with brilliant authorative display. Time and again, he drove the pace quartet of Steven Finn, Dernbach, Meaker and Chris Woakes through the covers. The moment, the pacers dug it in short, he was quickly in a position to play the pull shot.

Dhawan completed his century off 98 balls with a big six off Tredwell over deep mid-wicket.

Credit should also be given to young Milind, who showed a lot of maturity and paced his innings to perfection. Whether it was playing the slash over deep third man or driving on the up, Milind had an answer to everything that was thrown at him.

Milind hit seven fours and three sixes in his 85-ball knock. The shot that stood out was a six over extra cover off Meaker.

Earlier, Ian Bell scored a fine century as England posted a challenging score of 294 for five after being put into bat.

Having scored 91 in the first match against India A, Bell was again in fine form as he batted with lot of responsibility scoring 108 runs with the help of 10 fours and two huge sixes.