India C posted an imposing total of 352/7 riding on centuries from skipper Ajinkya Rahane and fellow opener Ishan Kishan in the final of the Deodhar Trophy 2018-19 against India B at the Feroz Shah Kotla, Delhi on Saturday.

After opting to bat, Rahane and Kishan combined for a stand of 210 runs for the opening wicket in just 30/3 overs with Jharkhand s wicket-keeper batsman Kishan playing the aggressor s role. He got to his 100 off just 76 balls before falling to Jaydev Unadkat. Kishan hit 11 boundaries and six sixes during his 87-ball 114-run knock.

Rahane carried his bat through remaining unbeaten on 144 off 156 deliveries with the help of nine fours and three sixes. Suryakumar Yadav powered his way to 39 off just 18 balls with the help of four sixes and one four. Shubman Gill added 26.

India C could have taken target close to the 400-run mark had it not been for a batting collapse in the death overs that saw the team lose four wickets for just 17 runs. 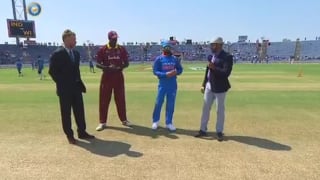