West Durtson, Billy Godleman and Harvey Hosein stood out for the hosts.

Derbyshire made merry against an Indian attack on Day One who, barring from the impressive Ravindra Jadeja, who struck two quick blows before and after the Tea break to give Indians a glimmer of hope to run through the batting order. Wes Durston with good help from Ben Slater earlier on hammered the toothless attack at will. Durston in particular found the boundary ropes like nobody’s business and India just couldn’t pick themselves up after that and Ben Godleman’s stoic resistance and  Harvey Hosein’s fluent knock.

Earlier, Indian bowlers had the initiative in the middle overs thanks to Ravindra Jadeja‘s foxy left-armers getting them two quick breakthroughs. Durston though, put the visitors’ attack to the sword and moved the score along at a brisk pace.

Ben Slater, earlier in the day played a patient knock and crawled to his half-century minutes after the second session of the day commenced. Derbyshire opened with the pair of Ben Slater and Paul Borrington. It was a sedate start to the innings by the pair, as they added just nine runs in over five overs before Borrington succumbed to Pankaj, caught by Ajinkya Rahane. Borrington’s 17-ball innings yielded him no runs at all, as the prospects looked bleak for the hosts.

However, new man Chesney Hughes and Slater steadied the ship, and kept accumulating runs in ones and twos. With the advent of the wayward Varun Aaron and Ishant Sharma, however, the two were able to pick up a few boundaries to boost the run rate. Aaron came back well in his later overs, but Ishant continued to take a pounding, going at five runs per over at a time when the next most expensive bowler had an economy rate of 2.67. 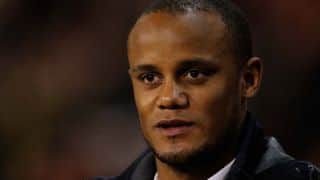