Despite David Warner s availability, Williamson is likely to lead the Hyderabad franchise.

Recovering from the shoulder injury, New Zealand skipper Kane Williamson is set to lead the Hyderabad franchise in the upcoming edition of the Indian T20 League. While former skipper David Warner will be available to play for the side, Williamson, who powered the team to the final in the last season, will captain the side.

“I’m in doubt for the first match, but we actually have a fairly decent break between the first and the second match, which should be more than sufficient time for my injury to heal and for me to be available for selection, so that’s exciting, Williamson, who sustained the injury during the Test series against Bangladesh, told stuff.co.nz.

The 2016 Indian T20 League champions will kick off this year’s campaign on March 24 when they face Kolkata and then host Rajasthan on March 29 at the Rajiv Gandhi International Stadium. (ALSO READ: Indian T20 League: Hyderabad s full group stage schedule)

The cash-rich T20 league will be followed by the 2019 ICC Cricket World Cup and hence, the workload management has become a buzzword for the Indian team as well as the other team featuring the tournament in England.

Williamson though said that participation in the event in India won t impact the preparations for the showpiece event which kicks off on May 30. (ALSO READ: How Laxman kept Warner s spirit high on Hyderabad return)

“People have spoken about preparation for the World Cup for a long time and they’ve spoken about this whole season and playing one-day cricket being preparation, but to me it’s all about the game that you’re in, said the Kiwi skipper before adding, If you’re preparing as well as you can for what’s in front of you, then I think that does help with the next step which might be in front of you, without looking at that next one too closely.

“It is about the cricket you are involved in and the team you are playing in, and after that the focus very much does turn to the World Cup, a different format, one-day cricket, and the warm-up games we have before the competition starting, concluded Williamson. 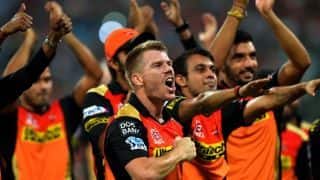