Australia may have been struggling with their form across formats but captain Aaron Finch is hopeful they can give India a run for their money.

Australia may have been struggling with their form across formats but their T20I captain Aaron Finch is hopeful they can give India a run for their money in the three-match T20I series starting from Wednesday.

Both on and off the field, Australian cricket is enduring tough times and in the absence of premier batsmen in Steve Smith and David Warner, their task will be cut out against Virat Kohli‘s India.

Howevr, Finch feels that the shortest format allows the hosts to be aggressive and more competitive against a strong Indian side. “Although we lost to Pakistan in the UAE, we are a very good T20 side. I think we played some good cricket in Zimbabwe and before that in the tri-series against New Zealand and England last year. We are very confident in this format,” Finch said.

“India have been in great form in all formats over a long time now. But it is going to be a great opportunity for us to come out, play aggressively and express ourselves. We can take the game on and really try to take it to India.”

The first match will be played at the Gabba. The T20 Internationals will be followed by a four-match Test series and three ODIs. “T20s are fast-paced short games obviously. At times it can take one bit of brilliance with bat or ball, or even in the field, and it can change the dynamics of the match or even the whole series.

“So it is a great advantage to be able to start off against India in this format. They have been so dominant in this format that people forget where they are playing at times,” he added.

Australia fielded an all-pace attack in their one-off T20I against South Africa on Saturday. That is expected to change with a lone spinner to come to the playing eleven.

“That will be in the calculations. With the size of this ground and how good our spinners have bowled here, while they haven’t been huge wicket-takers, they have bowled well. We have options in Ashton Agar and Adam Zampa.

“Traditionally, there is pace and bounce in this wicket. Indian batsmen have been here before, so there isn’t an element of surprise with the amount of cricket being played nowadays. But we will still look to use it to our advantage. The boundaries are bigger here than in India, and it could alter strategies.

“You cannot hit as many sixes to influence the game as soon as you come to the crease, and you might have to steal doubles instead. I think the team that deals with it the better will win this series,” Finch said.

The ball tampering scandal and its aftermath is still making headlines here. On Tuesday, Cricket Australia refused to shorten the bans on Smith, Warner and Cameron Bancroft.

“It would have been great to see the guys playing some domestic cricket at the backend of this summer, but we have to respect Cricket Australia’s decision and for the ban to stand. We have to move on (to the series at hand).”

Finch said that it didn’t make a difference to their preparations, and that Australia are still a side that is desperate to win.

“We’re still intense and desperate to win and we are going about that the right way. Playing hard is the Australian way but to different people that means different things. It’s not all about verbal and things like that.

“You talk about being tough and aggressive, and that means verbal, but I don’t see it as that. It’s about your body language and presence on the ground. That’s what Australia always prides itself on in all sport. That’s presence, that’s fierceness and tough cricket.”

When asked about countering Kohli and his pre-tour statement about not feeling the need to be aggressive anymore, he replied, “Virat plays the game that gets the best out of himself, and I think that at times, for him that’s about being verbal for his team, and pumping them up and being right in the contest. He loves that.

“He plays the same way for everyone, whether for India or in the IPL. So, the verbal won’t change whatsoever I think what he was referring to was his aggression, but ‘verbal’ is encouragement for teammates. It’s not abuse or anything like that.” 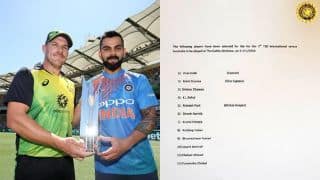