Mashrafe Mortaza fought hard for his 47 but lacked support from the other end.

Dhaka Dynamites fought hard and won the much needed encounter against Comilla Victorians in Match 13 of the Bangladesh Premier League 2016-17 at Dhaka on Monday. Comilla Victorians batsmen failed to get things going as their top-order failed to garner runs. Mashrafe Mortaza played a crucial hand lower down the order but lacked support from the other end. Mohammad Shahid bowled and picked three wickets and inflicted immense damage. Seekkuge Prasanna also chipped in with two wickets and helped his side to gain tow valuable points. Their bowlers were upto the mark and did a commendable job in defending the total despite dew being a massive factor. Full Cricket Updates, Dhaka Dynamites vs Comilla Victorians , BPL 2016, Match 13 at Dhaka

Chasing 195 is never an easy task and needed a solid start from the top-order but it wasn’t to be. Victorians lost their first wicket at the score of 30 as Imrul Kayes was dismissed for 10. From here on, they kept losing wickets at regular intervals as the momentum kept drifting away from them. They needed someone from the top-order to anchor the run-chase but none did as they floundered after good starts. Mashrafe Mortaza looked good and played a solid innings but didn’t have enough runs on the board from the top-order. Mohammad Saifuddin remained unbeaten on 18 as Victorians suffered another defeat.

Earlier, Comilla Victorians won the toss and elected to field first on a surface, which looked good for bating. Their batsmen did a good job in posting 194 runs on the board in the first innings. Mehedi Maruf played an emphatic knock of 60 runs at the top while Nasir Hossian was exceptional at three and accounted for 43 runs. Rashid Khan had three wickets to his name other than whom most of the bowlers struggled. Allen Hill: The man who took the first wicket and the first catch in Test cricket 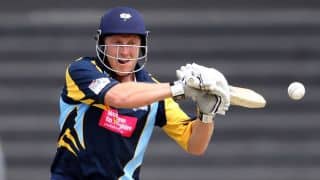