Titans won the toss and elected to bat first as he conditions looked good enough for batting.

Khulna Titans played and posted 157 runs in the 18th game of the ongoing Bangladesh Premier League against Dhaka Dynamites at Chittagong. Titans played well after being in a precarious situation as their middle-order helped them sail out of crisis. Titans won the toss and elected to bat first as he conditions looked good enough for batting. It’s an important game for both the teams as Dhaka Dynamites are battling to retain their top spot in the points table while Titans just have a solitary win from four outings. Titans didn’t get off to a desired start, as they lost their first wicket for 3. Hasanuzzaman was dismissed for a duck after which Shuvagata Hom took guard. FULL CRICKET UPDATES: Dhaka Dynamites vs Khulna Titans, BPL 2016, Match 18 at Chittagong

Andre Fletcher got a good start but failed to convert as he was out after putting 20 runs on the board. Sunzamul Islam got the better of Fletcher as Titans were in trouble at 23 for the loss of two wickets inside the powerplay. Hom and Mahmudullah played brilliantly to weather the early storm and built a platform. Hom was removed by Dwayne Bravo with a beauty but Mahmudullah stood like a rock at the other end. Mahmudullah played brilliantly for his 62, which contained as many as four boundaries and equal number of sixes. It was a good display of graceful batting under pressure by Mahmudullah as Titans bowlers now have some runs on the board to play for.

Dynamites bowlers did a good job with the ball as Dwayne Bravo picked couple of wickets and conceded 27 runs in his spell of four overs while Sunzamul Islam, Mohammad Shahid had one each to their name. They have managed to restrict the Titans to a modest score of 157 and now their batsmen will have to get the job done. The target is a tricky one as a span of few overs can change the momentum. Dynamites have the firepower in the batting and also bat deep. Titans need early wickets with the new ball to put pressure on the opposition and further win the game. 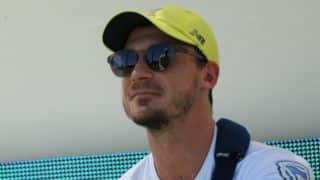