Samit Patel, Mominul Haque powered the Kings' run-chase and helped their side gun down a massive target of 183.

Rajshahi Kings beat Dhaka Dynamites by three wickets in the 21st game of the ongoing Bangladesh Premier League 2016-17 at Chittagong on Monday. Samit Patel, Mominul Haque powered the Kings’ run-chase and helped their side gun down a massive target of 183. Haque got his team to a flying start as he scored 56 runs at the top. They lost couple of early wickets, which certainly added immense pressure but Patel did well to weather the early storm and keep the scoreboard ticking. Samit played a match-defining knock of 75 runs off 39 deliveries, which included five boundaries and six maximums. The duo accounted for 100 runs between them, which was also the turning point between them. Bangladesh Premier League (BPL) 2016: Schedule and Time Table

Rajshahi Kings bowlers were unable to defend the total as the game was lost on the final over. They did well to pull things back after Patel’s onslaught but couldn’t get the job done as they lost the game by a whisker. Dwayne Bravo was among the wickets as he had three to his name but leaked a lot runs, which wasn’t helpful. Mohammad Shahid bowled well and had couple of wicket to hos name while Shakib Al Hasan and Matt Coles had one wicket each. The lower middle-order chipped in with some valuable runs, which turned out to be the key for their success. Rajshahi Kings have now registered their second win in the tournament and a much needed one as they now at the sixth position in the points table. Dhaka Dynamites on the other hand are at the second spot with eight points in their kitty.

Earlier, Dynamites won the toss and elected to bat first on a surface which was conducive for batting. Their openers did a good job in getting the team off to a flying start. Mehedi Maruf looked in good nick and got the ball rolling from the outset. He played some good strokes inside the powerplay and was equally supported by Kumar Sangakkara at the other end. The duo accounted for 71 runs at the top and steered their side in driver s seat. The stage was set for the middle-order to capitalise and they did well in doing so. 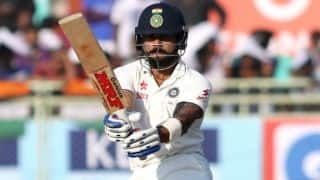