Skipper Mahendra Singh Dhoni hit his first century in 21 months, while VVS Laxman remained unbeaten on 168 to help India put up a huge 613 for six at tea on day two of the second Test against the West Indies. 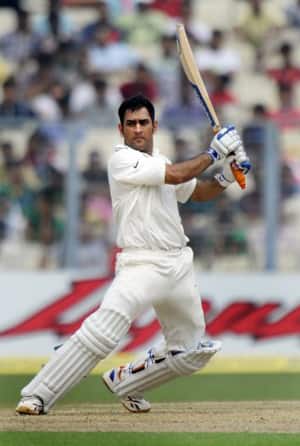 Skipper Mahendra Singh Dhoni hit his first century in 21 months, while VVS Laxman remained unbeaten on 168 to help India put up a huge 613 for six at tea on day two of the second Test against the West Indies.

Dhoni was unbeaten on 138 with 10 fours and four sixes in an innings from 174 balls, while Laxman stood tall at his happy hunting ground with 168 from 273 balls (11×4). The duo shared an undefeated 217-run stand for the seventh wicket.

lucky not to be dismissed on 13 and 16 when he edged no balls twice to Kemar Roach, Dhoni never seemed to be in any trouble in dealing with the West Indies bowlers.

From the West Indies point of view, playing with just one regular spinner in Devendra Bishoo came as a big blow as rookie Kraigg Brathwaite and Marlon Samuels did not make any impact on Dhoni and Laxman’s strong stand.

Dhoni was particularly ruthless on Brathwaite hitting the off-spinner for two sixes and a boundary to notch up 19 runs in the same over.

The extended second session was because lunch was taken early due to poor light. The West Indies conceded 180 runs in 41 overs of the session as Indians did not lose any wicket with Laxman and Dhoni going strong.

Dhoni reached his fifth Test century by driving a full toss from Brathwaite to long off.

Interestingly, Dhoni’s last century was at the Eden Gardens in February 2010 against South Africa and since then he scored seven fifties in 32 innings.

Earlier, India began the day well as an aggressive Yuvraj Singh took the crease on a hazy and humid morning.

While Yuvraj was looking to take chances, Laxman batted with usual elegance.

In full flow, Laxman also enjoyed a bit of luck as well even as new ball bowlers Kemar Roach and Fidel Edwards had a tough grind.

While on 79, Laxman’s thick inside edge from a short Roach delivery beat the stumps and wicketkeeper Carlton Baugh to go for a boundary.

Yuvraj too had his share of luck when a loud LBW appeal by Edwards was turned down. But stylish left-hander failed to make use of the good opportunity and got out cheaply.

The batsman had the perfect platform given by yesterday’s centurion Dravid and Laxman but was dismissed LBW by Darren Sammy on 25, once again highlighting his woes as a player for the longer format.

India lead the three-match Test series 1-0 after their five-wicket victory in the opening match at Ferozshah Kotla in Delhi. (PTI)