The Chennai top order took plenty of risks and succeeded in leaving their side four down inside the Powerplay, after which MS Dhoni single-handedly took CSK past 100 and towards some respectability. 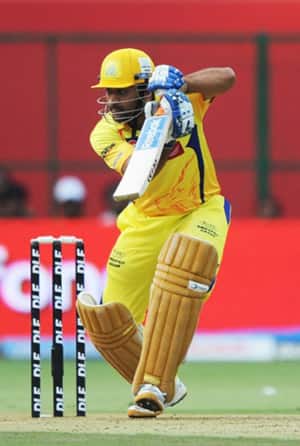 That they had already qualified for the knock-offs and didn t care too much about where they finished was evident in the way Chennai Super Kings came out to bat at the M Chinnaswamy Stadium. The top order took plenty of risks and succeeded in leaving their side four down inside the Powerplay, after which MS Dhoni single-handedly took CSK past 100 and towards some respectability.

Dhoni s 70 was the highest score by some margin; only one other batsman reached double digits and the 48 that Dhoni hit in boundaries were more runs than what nine other players managed collectively. Royal Challengers need to win this match to stay in the top two, and their hunger to succeed has left them with a great chance of doing so.

The difference that Daniel Vettori and Zaheer Khan make to the RCB attack was felt inside the first six overs, when the experienced pair accounted for three wickets. Michael Hussey was the first to go, bowled by Zaheer while attempting to belt the cover off the ball in the third over. Murali Vijay poked loosely at a good delivery from Sreenath Aravind, after which Suresh Raina for the umpteenth time fell trying to be the hero.

Having been tied down by Zaheer in the previous over, Raina attempted to slog a short ball and picked out point instead. Subramanian Badrinath, after playing nine scoreless deliveries, tried to hit Vettori and ended up looking ugly.

Twenty-two for four was not what MS Dhoni expected to walk out to. Vettori stemmed the flow of runs with typically canny bowling. Not much was on offer with Vettori in operation and Aravind bowling a very good first spell (3-0-11-1), and so Dhoni and Wriddhiman Saha trained their attention on Chris Gayle. Dhoni started off by welcoming Gayle with a hit over long-on and Saha followed by slog-sweeping six over midwicket.

Saha s aggression didn t last long as he pulled an ordinary delivery from Virat Kohli to the deep, and Vettori (4-0-15-2) came back to immediately unsettle Dwayne Bravo with an arm ball. Albie Morkel also fell trying to go hard at the ball, and with wickets falling regularly Dhoni was the only one who managed to connect cleanly. He looted 17 of the final over, bowled by Abhimanyu Mithun, and without his unbeaten 70 CSK would have folded for much less.

IPL is far from reality: Oram