Mahendra Singh Dhoni's presence in the middle-order makes it easier for him to nudge around singles and play his natural game, feels Aussie veteran Michael Hussey. 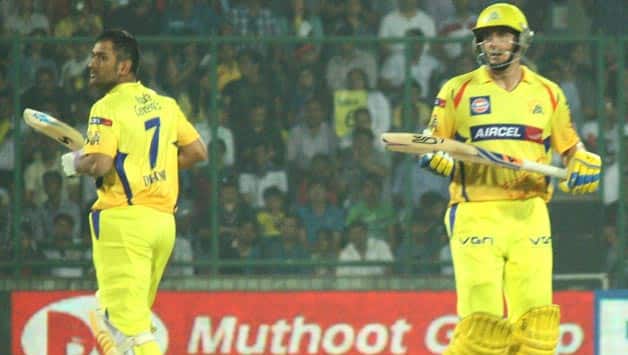 Mahendra Singh Dhoni‘s presence in the middle-order makes it easier for him to nudge around singles and play his natural game, feels Aussie veteran Michael Hussey.

“Obviously, when you have someone like MS [Dhoni], you tend to bat more freely. You can just take your singles and rotate the strike. It’s really an enjoyable experience batting with guys like MS and Suresh [Raina] who are boundary hitters,” Hussey, who anchored the innings with an unbeaten 65, told reporters at the post-match press conference.

“Aafter assessing the pitch, I gave [Stephen] Fleming a feedback during Time-Out that 150 will be a good score. But with hitting power of MS, you can always back yourself for those extra 20 runs,” Hussey revealed.

Hussey said it was a conscious plan not to go after the bowling right at the outset.

“The pitch was a bit on the slower side and the balls were also keeping low. It was a conscious decision to hold one end up. Well, if you ask me, I definitely fancy trying to get 10 runs per over but against good bowling, I might not be able to do that!” Hussey answered with a smile.

Admitting that they have been a bit inconsistent till now, Hussey termed this 86-run win over Delhi Daredevils “right up there with their win against Kings XI Punjab” in an earlier match.

Among the ‘Above 35 Club’, Hussey has been the star performer as two of his illustrious colleagues Ricky Ponting and Adam Gilchrist have flopped with the bat.

Can he be an inspiration for them, Hussey replied, “They have enough motivation to do well. T20 is also about a bit of luck and I am confident that they would do well in the coming matches.”

Talk about an early retirement, the 37-year-old seems content with his decision.

“Look, it was never a cricketing decision to quit the international cricket. It was always a family decision. Considering that international cricket needs you to be on road for around 11 months, I found it difficult as I have my wife and really young children back home.”

Paul Reiffel: A fast bowler who bowled had great control over line and length